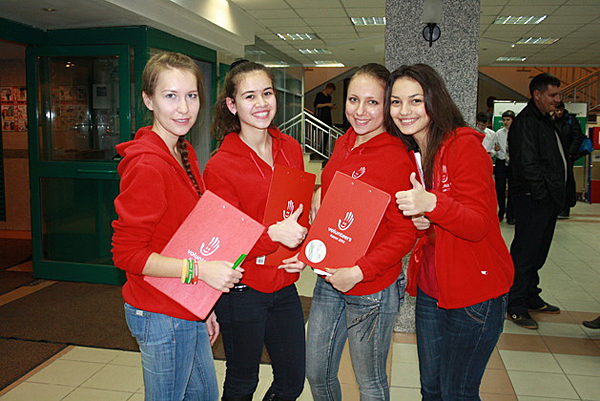 KAZAN – Dec 03: With a little more than a month left to go until the closure of online application process at www.makeureal.kazan2013.com, the Kazan 2013 volunteer recruitment drive inches closer to its completion.

41,442 candidates have already applied to volunteer during the 2013 Summer Universiade. There are representatives from various regions of the Russian Federation and international candidates among the applicants but the majority of would-be volunteers are citizens of the Republic of Tatarstan and Kazan.

The regions that contributed most to the recruitment drive’s success are the Moscow Region, Sverdlovsk Region and Leningrad Regions; 1,579, 923 and 823 people respectively put their names forward as Games-time volunteers.

Unlike non-local volunteers, candidates from Kazan still have a chance of getting behind the Games; if the volunteer application process in regions of Russia closed on November 10, 2012, the online application deadline for citizens of Kazan is January 1st, 2013. All those interested in volunteering during the 27th Summer Universiade can apply either online at www.makeureal.kazan2013.com or at the MEGA mall’s promotion zone every weekend from 10am to 10pm.

Kazan 2013 volunteers help guide all people wishing to work at Games time through the application process during sporting and cultural activities taking place in the city. For example, an event promoting sports volunteering was held during the KVN Junior League’s festival at the Ak Bars Youth Centre the day before to give students updates on Kazan’s preparations for the World University Games and to help them apply for a variety of Games-time opportunities.

As we have earlier reported, 20,000 volunteers are needed to help make the Kazan 2013 Summer Universiade happen. All of them will be provided with uniforms, meals, transport services, mobile phones and a wide range of bonuses and merchandise from the Organising Committee and partners of the 2013 Summer Universiade. —- Kazan Media