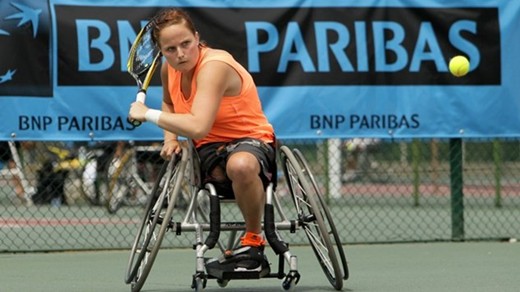 Fourth-seeded Filip Peliwo has proven that he can reach a Grand Slam junior final. Now he wants to prove that he can win a Grand Slam junior final. The 18-year-old Canadian, who hails from Vancouver, but trains in Montreal, was a finalist at the Australian Open and Roland Garros this year. He lost in the Australian to Luke Saville of Australia 63 57 64. He fell to Kimmer Coppejans of Belgium at Roland Garros 61 64.

“It’s been a good start to the year and I’m hoping to keep it going,” Peliwo said. “In Australia I thought I played well the whole tournament and a decent final, although I didn’t play my best, but Luke play great. At the French, pretty much every match was difficult and clay is not my best surfaces. Once I got to the final I had some expectations — I tried not to think about it — I wanted it too much and I didn’t play my game and Kimmer just went out and played the best I’ve seen him play.”

Now he’s hoping to step up and go one match further at Wimbledon. It’s a kind of lofty goal for someone who won his first grass court match 76 (5) 63 against Albert Alcaraz Ivorra of Spain at Wimbledon on Saturday.

“I would love to win a slam and that would get me close to the No. 1 spot as well,” said Peliwo, playing his final year in the juniors. “Especially here at Wimbledon, where I didn’t do well last year, and there’s so much history. And just to say I won one in the juniors.

“I know the ultimate goal is to win slams in the professional tour, but I’d love to get one before the year is over. And I’d like to give myself a shot at the No. 1 ranking, that would be really big for me.”

Peliwo saved the only break point he faced on serve in the match, which happened in the first set that he captured in the tiebreaker. He had seven opportunities to break Alcaraz Ivorra’s serve seven times — four times in the first set and three times in the second set, but only broke the Spaniard’s serve once in the second set. Peliwo has limited knowledge of grass court tennis — he’s a hard court kind of guy.

“I have almost no experience at all on it,” Peliwo said. “I lost the two matches I played on it last year. I got that first win today. I’m feeling more comfortable as I know how I’m supposed to play and how to move.”

Like Peliwo, 17-year-old Herkko Pollanen of Finland has had very little experience playing on grass. But that didn’t prevent Pollanen from coming up with a 76(7) 75 first round win against Wayne Montgomery of South Africa. Herkko Pollanen picked up the game by following his father, Antti, an attorney, to the tennis courts as an eight-year-old. “It’s my second time on grass and it’s really interesting,” Pollanen said. “I enjoyed playing on it.”

Pollanen, who is friendly with Finland’s favorite tennis son, Jarkko Nieminen, is on the 2012 ITF/Grand Slam Junior Touring Team. The team opens doors, financially and in game development, for the juniors who are named to the squad.

American Mitchell Krueger was also happy to win his first match on grass at Wimbledon in his third trip to play the junior boys’ competition. The eighth-seeded Krueger, 18, had a tough outing against Briton Kyle Edmunds, a regular playing on the grass. He came through with a 46 76(6) 10 8 victory in their hard fought battle. “Feels good to finally win a first round here,” Krueger said. “The last three years I’ve lost 16-14 in the third, last year 8-6, and this year 10-8. I personally think he’s one of the best grass court juniors, for sure. He’s British and plays on it a lot. I knew it was going to be tough.”

In other boys’ action, 10th-seeded Mateo Nicolas Martinez defeated Connor Farren of USA 62 62. And in an upset, Petro Licciardi of Italy took out 15th-seeded MacKenzie McDonald of USA.

Shingo Kunieda of Japan took his career tally of men’s singles Super Series titles to 18 on Sunday when he won his third successive crown at the BNP Paribas French Open, part of the NEC Wheelchair Tennis Tour, in Antony, Paris.

Fourth seed Kunieda, who dropped to No. 7 in this week’s world rankings due to his relative number of tournament success over the last 12 months due to injury, continued his bid to try and return to his previous heights in the sport when he dominated world No. 5 Stefan Olsson of Sweden for a 61 62 victory.

A year on from winning her first Super Series title in the French capital world No. 2 van Koot retained her women’s singles title in straight sets.

Van Koot had to come from a set down to beat her compatriot Marjolein Buis in the 2011 final, but with the same two Dutch players in this year’s title decider van Koot made a much better start and went on to secure a 63 62 victory.