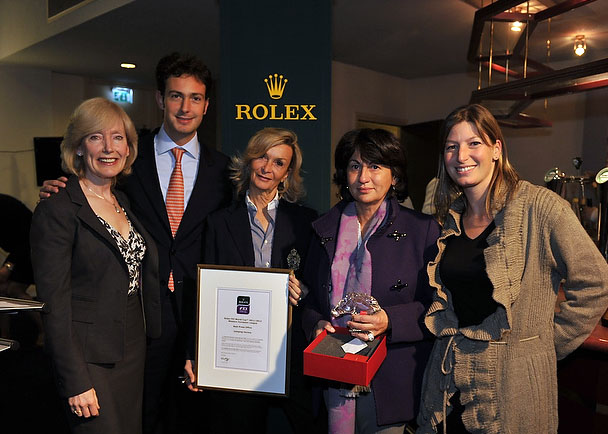 The Best Press Office award was introduced at the start of the Rolex FEI World Cup™ 2010/2011 season to celebrate the hard work of the event organising teams. Press offices were judged on several key media services, including on-site and online media services, press conferences and swift information supply throughout the qualifiers.

The Jumping Verona media team numbers eight, and is led by Caterina Vagnozzi. Caterina has been press officer of Jumping Verona, which hosted the fourth qualifier of the Rolex FEI World Cup™ Jumping Western European League 2011/2012 series, since 2003. She has also been press officer at the Rome CSIO for the past 23 years, was Press Officer at the FEI World Equestrian Games™ in Rome in 1998, and at all the Pavarotti International Horse Shows at Modena.

She headed up the press office at FISE, the International National Federation, for 12 years and has been press officer at all the Italian FEI World Cup™ qualifiers. She is also a well-known journalist for the Italian newspapers Il Messaggero and Gazzetta dello Sport.

“I am so honoured that our press office has been acknowledged and I would like to take this opportunity to thank the Organising Committee of Jumping Verona, who made it possible to provide such a good service – this is truly a team effort,” Caterina Vagnozzi said.

“This year’s qualifier was particularly difficult because of the tragic death of Hickstead. As a mark of respect, we – the riders and Jumping Verona – decided not to continue with the competition to express our respect for one of the greatest horses in the history of the sport and his rider Eric Lamaze. This demanded that our press office work closely and professionally with international media at a very difficult time for everyone in Verona.”

“The press offices play a crucial role in the series and a top class press office provides the media with the facilities they need so that the sport and the sponsors get the visibility that they deserve.

“This award gives journalists and photographers the opportunity to vote for the press office that provides the best service on the Rolex FEI World Cup™ Western European League, and the clear winner was Verona.”