By Pamela Burton, Lausanne, 17 Sept 16, 2016: In a day of weather that changed as often as the ride leaders, Spain’s Jaume Punti Dachs captured individual gold and led his compatriots Alex Luque Moral and Angel Soy Coll to the team title at the Longines FEI World Endurance Championships 2016 in Samorin (SLK). 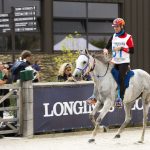 Punti Dachs, who also took team and individual gold at the European championships at the Samorin venue 12 months ago, had a perfect ride on the nine-year-old grey Twyst Maison Blanche to complete the 160km track in 06:46:42 with an average speed of 23.60 km/h.

The Spanish led an all-European team podium, with France taking silver and the Netherlands holding on for bronze.

The track, which ran between the river Danube and the neighbouring canal, as well as through forestry and farmland, was flat and fast and the 134 starters set off at pace from the 6am mass start.

Punti Dachs was consistently in the top 10 over the first four loops, and the 47-year-old, who was a team gold medallist over the challenging Sartilly terrain at the Alltech FEI World Equestrian Games™ 2014 in Normandy (FRA), ended his day with a flourish to scoop double gold and add the world title to his European crown. His wife Maria Alvarez Ponton, who was vetted out after the second loop, previously held the two titles concurrently after winning European and world gold in 2009 and 2010.

In fact none of the UAE team recorded a completion score, even though HH Sheikh Hamdan Bin Mohammed Al Maktoum and Ramaah had been at the head of the field throughout, until the 12-year-old gelding went out at the fourth vet gate. Sadly, Ajayeb, the 15-year-old chestnut mare ridden by Sheikh Hamdan’s team mate Sheikh Rashid Dalmook Al Maktoum, tripped and fell on the fourth loop of the track, suffering an irreparable injury to her right front leg and had to be euthanised.

“It was a very tough day”, Punti Dachs said. “There were magnificent horses in front of me, but endurance sometimes happens like this. You do everything right and then something goes wrong. It’s like life.”

It’s been something of a winning spree for Spain as their all-female team won the European Endurance Young Riders and Juniors Championships in Portugal earlier in the month.

Alex Luque Moral was thrilled to take team gold and individual silver in Samorin. “I slowed down to save my horse after the first fast loop, and then for the last loop, I decided to really have fun with my mare and show everyone what she could do after all the training for this championship.”

Angel Soy Coll, whose sixth-place finish sealed Spain’s victory, said: “I am very happy and very grateful to have been part of the team. It was a tough day but think I managed to do what was expected of me and my horse and get a good result for the Spanish team.”

Bronze medallist HH Sheikh Nasser Bin Hamad Al Khalifa, the only non-European on the podium, trained the 11-year-old Waterlea Dawn Treader for the championships at home in Bahrain and France. “The race was very difficult especially the third loop because of the humidity. I believed in my plan and it worked. My horse was not tired at all, he was perfect.”