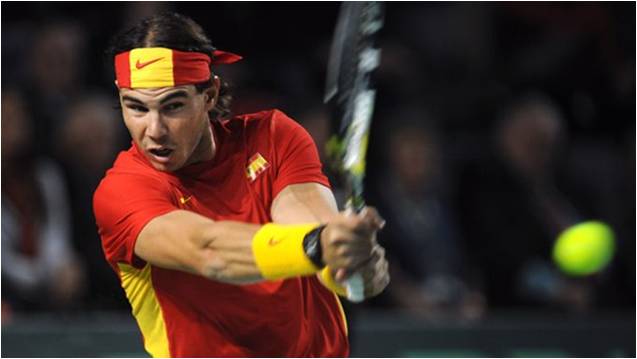 ITF Press Release: The ITF has announced the team nominations for the 2011 Davis Cup by BNP Paribas World Group Final between Spain and Argentina, to be played in Seville on 2-4 December (ITF announces team nomination​s).

Live scoring for the Final will be available on both DavisCup.com and CopaDavis.com throughout the weekend, in addition to live Davis Cup Radio, game-by-game text commentary, match reports, interviews, blogs, photos and scorecards.

Davis Cup by BNP Paribas is the largest annual international team competition in sport with 130 nations entered in 2011. The title sponsor is BNP Paribas, the Official Bank of Davis Cup.

Spain and Argentina will meet in the Davis Cup by BNP Paribas final for the second time in four years. The Spaniards qualified for the final thanks to an extraordinary performance by its No. 1 player Rafael Nadal.

The world No.2 travelled from New York to Spain right after playing an exhausting 4-set final against Novak Djokovic and won his two singles matches dropping only ten games against two top players like Richard Gasquet and Jo-Wilfried Tsonga. The third point was earned by the always reliable David Ferrer.

Argentina travelled to Serbia for a semifinal clash in which the South Americans were clearly the underdogs. However, the Argentines took the first two singles points on Friday and arrived into the last day with a 2-1 lead over the locals.

Novak Djokovic stepped into the court on Sunday for the first time in the tie to face Juan Martin del Potro and to try to level the score. But the Argentine played at a very high level and the Serb ended up retiring after his back problems became unbearable.

The 2008 Davis Cup final between the two nations took place in Mar del Plata (Argentina) and ended with a dramatic victory for a Spanish team that was missing its No. 1 player Rafael Nadal and was playing on its least favourite surface: hard.

Argentina’s only recent visit to Spain came in 2003 when a team formed by Gaston Gaudio, Mariano Zabaleta, Lucas Arnold Ker, Agustín Calleri and Gastón Gaudio was very close to cause a major upset when they forced the tie to go to the fifth rubber. However, Spain´s Carlos Moya did not give any option to Gaston Gaudio in the decisive match and the locals took a narrow 3-2 victory.