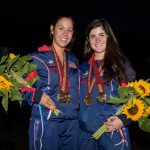 Jacob, the most experienced among the three with an ISSF World Cup Bronze already in her showcase, climbed atop the podium at the end of an extremely balanced match, finishing with 48 hits and setting a new Junior World Record.

16-year-old Austen Jewell Smith, the youngest among the six finalists, surrendered to Jacob only in the final phase of the match, as she missed four of her last ten clays and sealed her World Championship Silver with 44 hits. The third American finalist, Samantha Simonton (17), took Bronze and completed the all-USA podium with 37 hits out of 50 targets.

At the feet of the podium, Australia’s Aislin Jones barely missed the medals: the 17-year-old from Lakes Entrance, Victoria, left the contest because of a lower qualification ranking against Simonton’s one, as they both had 29 hits after 40 clays.

Jones was followed by first-time participant Vanesa Hockova (17) of Slovakia, who crushed 19 of 30 targets and finished in 5th position, while 20-year-old Hana Adamkova of the Czech Republic was the first shooter eliminated from the match, as she hit 9 clays out of 20 and took 6th place.

The team Gold medal was also won by the United States’, as Jacob, Simonton and Smith set a new Junior World Record with 211 points; the Czech Republic followed in 2nd place with the score of 193, signed by Adamkova, Anna Sindelarova and Zuzana Zaoralova; while Germany took Bronze with Eva-Tamara Reichert, Maria Kalix and Valentina Umhoefer, who scored 191.

In today’s second final United States’ Dania Jo Vizzi became the new women’s Skeet world champion: the 22-year-old, in fact, hit 54 out 60 targets to finish atop of the podium, beating Russia’s Albina Shakirova, who pocketed the Silver medal by hitting 52 targets on her home turf.

Vizzi – who had participated in three ISSF World Championships as junior in 2013, 2014 and 2015 – respectively taking Silver, Gold and Bronze – shot the first part of the match chasing Eleftheriou, who held the 1st place right to the middle of the final.

Then, the American moved up atop of the scoreboard as the Cypriot shooter started missing, defending her lead against Shakirova right to the last target.

It’s the third consecutive women’s Skeet world title won by the United States of America as Brandy Drodz won the championship in Granada (ESP) in 2014 and Morgan Craft did the same in Lonato (ITA) in 2015.

The US team confirmed its strength also by claiming the team Gold with a new World Record of 216 targets, scored by Vizzi along with the three-time Olympic Champion Kimberly Rhode – 4th in the individual event with 33 hits – and Caitlin Connor.

Team Italy, led by the reigning Olympic Champion Diana Bacosi – 5th in the individual event with 24 hits – secured Silver with a tally of 211 hits along with Katiuscia Spada and Simona Scocchetti. The Russian Federation followed them in 3rd place, as Albina Shakirova, Nadezda Konovalova and Anastasia Krakhmakeva marked a combined score of 209 targets. —- ISSF