Omaha, Nebraska, March 31, 2017: Isabell Werth of Germany, the most decorated dressage rider in Olympic history, performed in the main arena at the FEI World Cup™ Finals Omaha 2017 on Friday afternoon, but in a different capacity. Instead of competing, Werth headlined the “Young Horses to Grand Prix with Olympic Champion Isabell Werth, presented by the Dressage Foundation”. The event demonstrated the process of taking young horses to Grand Prix level and it was the first time Werth had ever taken part in an exhibition of this type in the U.S. Headlines Dressage

Werth is renowned for her ability to ride and train horses for the sport of dressage. This past Thursday, she won the FEI World Cup™ Final Dressage Grand Prix competition on her Olympic mount Weihegold OLD. In the event, Werth rode to an impressive score of 82.300%, the only entry to score above 80 percent. 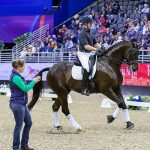 The Young Horses to Grand Prix exhibition featured four horses, two young 5-7 year-olds, a Small Tour horse and a young Grand Prix horse. Werth explained her training methods and the stepping stones she took in bringing a young horse up the levels to the highest level of dressage – the Grand Prix.

“We showed what was involved in taking a young horse from the beginning of his career to the highest level of dressage, that of the Grand Prix level,” said Werth. “We wanted to inform the public about the process, the challenges and the steps involved in training a horse to reach the pinnacle of dressage.” 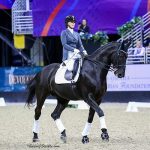 Following the opening ceremony, Devoucoux introduced their new dressage saddle, the Makila Harmonie. This ground-breaking saddle is the first to use a Dynamick® saddle tree, enabling a new and thoroughly modern way of riding. As part of the unveiling, international dressage rider Monica Burssens (MEX) rode in the saddle that Devoucoux believes will revolutionize the dressage world.

About Isabell Werth
Isabell Werth is the most decorated dressage rider in history and is currently ranked number one in world. She is a five-time Olympic veteran who has won a total of nine Olympic medals including the Individual Gold at the 1996 Atlanta Olympic Games. She has also won five Team Gold medals (2016 in Rio, 2008 in Hong Kong, 2000 in Sydney, 1996 in Atlanta and 1992 in Barcelona), plus four Individual Silver medals (2016, 2008, 2000 and 1992).

Werth has also won four Team and three Individual Gold medals, plus an Individual Bronze and a Team Bronze, at the FEI World Equestrian Games™ (WEG). She has won three European Championships and has twice been the FEI World Cup™ Dressage champion, winning the Finals in 2007 in Las Vegas aboard Warum Nicht FRH and in 1992 in Gothenburg, Sweden aboard Fabienne.