By Tom Lloyd, La Jolla, California, Mar 30, 2017: Home Team France and Surfing super-power Brazil have announced some of Surfing’s top professional talent to represent their nations and compete for Gold at the 2017 ISA World Surfing Games in Biarritz. 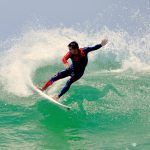 Brazil’s Miguel Pupo and Wiggoly Dantas and France’s Jeremy Flores, the 2009 ISA World Surfing Games Gold Medalist, and top ranked pro Johanne Defay have confirmed their participation on their men’s and women’s National Surfing Teams, set to vie for the honor of being crowned World Team Champion from May 20-28 at Biarritz’s iconic break of Grande Plage. 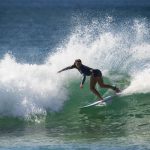 Host nation France have asserted themselves as early contenders to take Gold, featuring four WSL Championship Tour (CT) surfers. Led by the Reunion Island natives Flores and Defay, Team France will be rounded out by Joan Duru, Pauline Ado, and Vincent Duvignac, with the final male surfer to be announced in April.

Looking to challenge the host nation for Gold, Team Brazil has put together an equally powerful line-up worthy of the World Team Title with three WSL CT surfers of their own. Team Brazil will feature the power-surfing brother tandem of Wiggolly and Weslley Dantas, accompanied by Pupo, Ian Gouveia, Jaqueline Silva, and Suelen Naraisa.

In the weeks to follow, more National Teams will announce their rosters for this edition of the event, which is expected to break records for country participation. Team South Africa has gathered a strong squad as well, led by former WSL CT surfer Bianca Buitendag, and the 2015 and 2016 ISA World Team Champions Costa Rica and Peru respectively have yet to unveil their team members.

The 2017 ISA World Surfing Games is an Olympic style team competition that gathers National Surfing Teams from around the world. Each team can field up to four men and two women. The surfers compete for individual medals and the coveted Fernando Aguerre ISA World Team Trophy, donated by the ISA President, who was first elected in 1994.

“We are thrilled that some of the most talented and explosive professional surfers in the world will represent their countries at the 2017 ISA World Surfing Games.  The level of competition in Biarritz will be amazing.  The participation by these great athletes is also testimony to the excitement that is building in the Surfing world for the opportunity to compete for glory on the highest sporting stage – the Olympic Games in 2020.

“The drive to compete for the national teams is also evidenced by what we are expecting to be a record number of countries participating. Surfing is no longer dominated by a few countries, as we have continually seen more top Surfing talent coming out of non-traditional Surfing nations. Such growing universality is representative of the increased reach and global growth of the sport.

“Many of these surfers have a great chance to be among the first wave of Olympic surfers in the 2020 Tokyo Olympic Games. I am excited to see what will unfold in Biarritz, as it will give us a preview of what’s to come when Surfing debuts in the Olympic Games.”