Home  »  OTHER SPORTS   »   In Memoriam of Royal Dutch Equestrian Harmsen 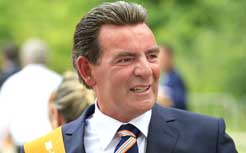 Lausanne (SUI), Sept 12, 2012: Sven Harmsen (NED), the Royal Dutch Equestrian Federation’s Chef d’Equipe, national coach and trainer for Ponies, Juniors and Young Riders in Jumping, has passed away at the age of 51.

He attended the 2012 Spruce Meadows ‘Masters’ in Calgary as Chef d’Equipe with the senior Dutch team of Jur Vrieling, Leon Thijssen, Harrie Smolders and Jeroen Dubbeldam, and shared their bronze medal win in the BMO Nations’ Cup on 8 September. Later that evening at the gala dinner he suffered a severe heart attack, from which he was unable to recover.

Sven Harmsen was a successful rider before his collaboration with the Royal Dutch Equestrian Federation. Silver medallist at the FEI Young Rider European Championships in 1982, he went on to compete successfully at both national and international level throughout the 1980s and 1990s. He clocked up several titles at events worldwide, including the Grand Prix in Hickstead (GBR) and Geneva (SUI) and FEI Nations Cup™ events in Falsterbo (SWE) and Drammen (NOR).

In 2005, he became Chef d’Equipe for Ponies at the Royal Dutch Equestrian Federation and the following year was appointed Chef d’Equipe for the Juniors and Young Riders. His dedication and commitment were rewarded on numerous occasions with many successful campaigns by the Pony, Juniors and Young Riders, notably at the annual FEI European Championships.

Jumping was an extremely important part of his life and he followed the evolution and development of the discipline very closely. He was passionate about horses and cared deeply about horse sport.

“Sven was highly committed and motivated, giving 200% to his role,” said Maarten van der Heijden, Technical Director, Royal Dutch Equestrian Federation. “Since he became Chef d’Equipe, there has never been a year that we have not won a medal. He focussed so much on getting the best from every rider and horse under his guidance and this passion made him extremely popular with everyone. We will miss him greatly.”

“Sven’s passion for Jumping and success in developing young riders in our sport is renowned,” added John Roche, FEI Director Jumping and Stewarding. “He will be sorely missed by everyone who worked with him at the Royal Dutch Equestrian Federation, and by the international Jumping community.”