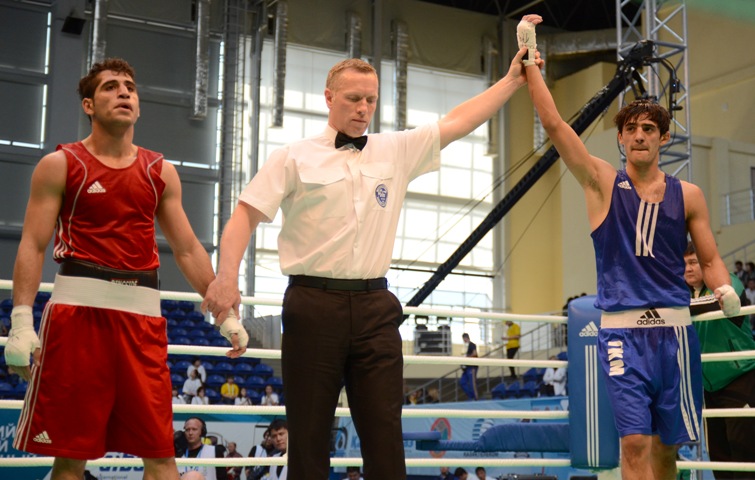 Lausanne, Switzerland, July 05, 2012 – Turkmenistan’s 26-year-old former Asian Champion and AIBA World Boxing Championships quarter-finalist Serdar Hudayberdiyev took on board all the advice he was given during the first phase of the AIBA ‘Road to London’ Program in Cardiff, Wales, earlier this year and put what he learnt into practice as he captured the Olympic quota place at the AIBA Asian Olympic Qualifying Event Astana 2012. The gifted boxer had previously tried to qualify for the 2004 Athens and 2008 Beijing Olympic Games but was unsuccessful.

Hudayberdiyev made his international debut at elite level and showed great potential at the third Asian Olympic Qualifying Event in Karachi, Pakistan, back in 2004. He was only 17 at the time and won a contest but was eliminated without qualifying for the Olympic Games. The virtuoso Turkmen then competed in his first worldwide event at the AIBA World Boxing Championships Chicago 2007, losing in his first bout.

The 2009 Asian Boxing Championships were a real breakthrough for Hudayberdiyev, who by now had established himself as his country’s No.1; as he went on to take the Lightweight title in Zhuhai by outpointing India’s Jai Bhagwan Singh in the final. At the AIBA World Boxing Championships Milan 2009, the Turkmen was seeded and put in three brilliant performances to advance to the last eight where he was eventually defeated by Puerto Rico’s Jose Pedraza, the eventual silver medallist. After Italy, Hudayberdiyev made the step up to Light Welterweight and after two year is now feeling confident at this level.

He also competed at the last AIBA World Boxing Championships in Baku and lost against Russia’s veteran Aleksandr Solyannikov in the second preliminary round and was therefore left with only one opportunity of qualifying for the Olympic Games. Turkmenistan’s team captain was then invited to take part in the first phase of the AIBA ‘Road to London’ Program to make sure he got the best training before seeking that career changing Olympic quota place in Kazakhstan.

Hudayberdiyev was in sensational form at the AIBA Asian Olympic Qualifying Event Astana 2012 where he eliminated several top rivals, including Pakistan’s Haider Riaz, Kyrgyzstan’s World Combat Games winner Ermek Sakenov and Iran’s Mehdi Toloutibandpi, but due to an injury sustained in his victorious semi-final, he was unable to face Kazakhstan’s Asian Games winner Daniyar Yeleussinov in the final. He was pleased with his silver medal and was delighted to have ensured he would be competing at the London 2012 Olympic Games.

His teammate, 19-year-old Youth Olympic Games bronze medallist Nursahat Pazziyev also qualified for the Olympic Games after reaching the Middleweight final in Astana, meaning Turkmenistan will now have two boxers in London just as they had in the 2004 Athens Olympic Games when Shokhrat Kurbanov and Aliasker Bashirov represented the nation. The two will now take part in phase two of the AIBA ‘Road to London’ Program once again in the Welsh capital, from 5-24 July. The whole world will be eager to see these talented fighters in action at the ExCeL London during this summer’s Olympic Games. ___ AIBA