Dublin, Nov 29, 2017: All 28 captains from both the men’s and women’s HSBC World Rugby Sevens Series attended the launch of the Emirates Airline Dubai Rugby Sevens on Wednesday as momentum builds to Rugby World Cup Sevens 2018 next July in San Francisco. 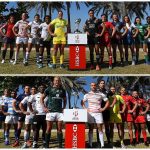 The women’s series kicks off on Thursday under the Dubai sun as reigning series and tournament champions New Zealand look to begin their campaign in winning fashion.

Head coach Allan Bunting’s side lost just one match out of 30 in the 2016-17 series, claiming five of six tournament titles in the process and finishing up top of the standings on 116 points.

“I think they’ve already inspired some of the girls,” said Bunting. “You know they’ve been at the Awards, come back and they’re on cloud nine and really stoked which is great for them but also I think inspires the young players in New Zealand who can see a real pathway.

You could be a normal school girl in New Zealand and go on to represent your country on the world stage someday. So I think they’re inspiring a lot of people back home and will do so at this tournament.”

In the men’s competition, South Africa enter Dubai as clear favourites having won the 2016-17 series in convincing fashion, with five titles to their name. Neil Powell’s side are reigning champions in Dubai, having beaten Fiji 26-14 in the final last year, and will be expected to perform after naming their most experienced squad ever for the tournament.

“We can’t underestimate anyone,” said Powell. “We are the reigning champions. There is a responsibility with that and we are expected to come out strong in Dubai. It’s a great tournament and the squad are looking good, so we are in the best place we can be coming into this series opener.”

Runners-up in 2016-17, England will be aiming to close the gap on South Africa who finished 32 points ahead of them on a huge total of 191. Simon Amor’s side, who are all sporting shaved heads in an effort to raise money for charity, reached the Cup final in Dubai back in 2015 but were stopped in their tracks by Fiji last year in the semi-finals, losing out 31-12.

“‘I’m really excited, it’ll be nice to come back after a long break and get in to some real competition again. It’s going to be an exciting year and everyone’s really keen to get stuck in now,” said Mitchell.

Dubai will act as the launch pad to an action-packed seven months of rugby sevens for both men’s and women’s teams who will be looking to gain vital points towards their eventual Rugby World Cup Sevens seedings. For the men, points from the first seven tournaments on the series will be added to their series total from 2016-17 to determine seeding in San Francisco.

For the women, their 2016-17 series totals will be added to the first two rounds in Dubai and Sydney next January. —- WR