Malaysia denied the highest-ranked team in the event a historic double by coming from behind to beat the favourites 2/1 in a dramatic men’s final at the Gelora Bung Karno Sports Complex in Jakarta, Indonesia.

The women’s final was a repeat of a qualifying tie 48 hours earlier in which Hong Kong, the second seeds, overcame third seeds India 2/1 to claim pole position in Pool B.

But India earned the re-match in the final after creating the event’s biggest upset by ousting defending champions Malaysia, the team led by the newly-crowned ‘Greatest Player of All-Time’ Nicol David who were seeded to take gold for the third successive time. 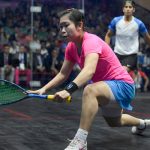 The third seeds were unable to reverse the outcome, however, as third string Sunayna Kuruvilla went down in four games to Ho Tze-Lok – before talented left-hander Annie Au clinched gold for Hong Kong after beating Indian top string Joshna Chinappa (both pictured above) 11-3, 11-9, 11-5 in 28 minutes.

“I’m very happy for them and they certainly deserved this success,” added the 2002 Asian Games individual gold medallist. 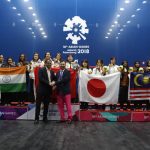 Hong Kong and Malaysia both reached the Jakarta men’s final unbeaten – and both were looking for first-time title success.

And the elusive double looked on the cards when, in the opening clash between the teams’ third strings, Yip Tsz Fung put Hong Kong ahead with a four-game win over Malaysian Ivan Yuen – after surviving a marathon 20-18 second game.

With the crowd on the edge of their seats, Malaysia drew level when team number one Nafiizwan Adnan (seen above celebrating his breakthrough win) defeated higher-ranked Max Lee 11-9, 11-7, 11-7.

Having not played in the earlier individual event, Malaysia’s second string Eain Yow Ng – at 20, the youngest player in the squad – had no Games history against his Hong Kong opponent Leo Au, the 2018 men’s individual gold medallist.

But in the biggest match of his career so far, the young Malaysian truly came of age when he trounced Au in straight games, 11-7, 11-7, 11-4 in 36 minutes to bring the gold medal to Malaysia. 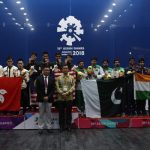 “As a team we bonded well,” said the jubilant Ng (pictured above with his team-mates in the men’s presentation group) after his seventh straight win in the championship.

“We came into the tournament knowing that we can win and we certainly did it/Hong Kong China dispatched India.

“I always believed that Nafiizwan will deliver a point for us and I was really just focused on my own game.

But I also did my homework well.

I did a lot of video analysis and the fact that I didn’t play in the individual but managed to beat the individual champion, certainly worked out well in the end.” 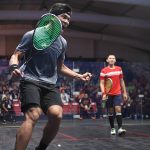 Malaysian captain Adnan was also in jubilant spirits (as seen above) at finally clinching a Games team gold in his third appearance in the event.
“I did not want to bow out of my third Asiad without a fight. I was on the losing team twice already so I really gave it everything I had.

Of course there was pressure when Ivan lost. But pressure is like a dessert and I love dessert.” 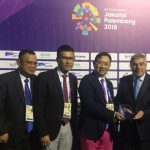