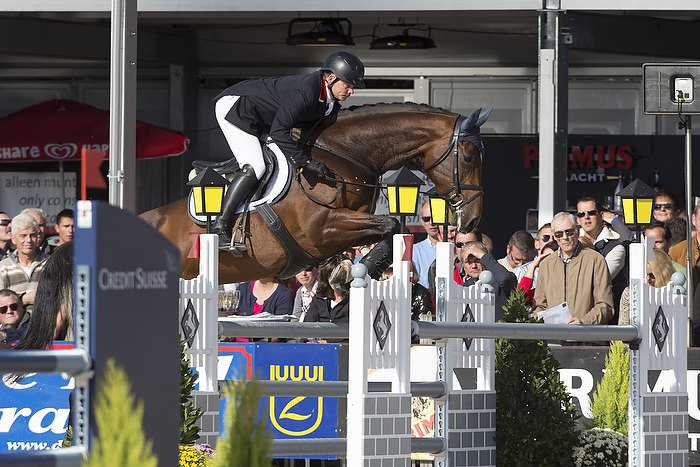 Lanaken (BEL), 30 September 2012: Horses from the Holsteiner, Belgian Warmblood and Oldenburg Studbooks claimed gold at the FEI World Jumping Championships for Young Horses 2012 which drew to a close at Domein Zangersheide in Lanaken, near Maastricht, Belgium today.

Open to Five, Six and Seven Year Olds, this event has established itself as a milestone in the careers of many champions, and an important conclusion to the breeding season for stud-owners and horse-producers from all around the globe. It has developed into a hugely popular star-spotting occasion at which not just the winning horses, their breeders and riders gain status with a prestigious world title, but the best breeding lines of the present, and the future, are also identified.

Entry is free to the public, and huge numbers attend this annual celebration of the horse where they get the opportunity to compare the merit of the up-and-coming generation of equine stars. Today they enjoyed warm and pleasant weather conditions as the best of the best battled it out for the medals in each of the three categories.

Germany’s Toni Hassmann steered the Holsteiner mare, Con Cara (Con Air x Franklin), to victory in the first Championship final of the day in which 43 horses vied for the Five-Year-Old title. There were 13 clears in the first round here, while five were denied a place in the jump-off when picking up time penalties. Only five horse-and-rider combinations were fault-free second time out, when Con Cara sprang something of a surprise.

Owned by Wilhelm Hacke, the big bay doesn’t give the impression of speed as her rider explained. “She seems a bit slow, but she has a lot of blood and in the jump-off when I asked her to go fast she really responded!” Hassmann said. “She doesn’t have a lot of experience either, I took her to one show, the Bundeschampionate (in Warendorf, Germany) a few weeks ago and she qualified for Lanaken when she finished seventh in the Five Year Old Final there. I think she is definitely a horse for the future” he added.

Belgium’s Pieter Clemens lined up in silver medal position with the Zangersheide stallion Casuality Z (Cassini II x Chellano Z). Clemens’ mother, Rita, is a sister of Belgian jumping star Ludo Philippaerts, and the 18 year old rider joined his uncle’s jumping team at the beginning of July having finished high-school. He quickly followed that by winning team silver at the FEI European Jumping Championship for Juniors in Austria the following month, and today he showed great maturity when bringing Casuality Z home just fractionally slower than Hassman’s target-time to slot into runner-up spot with the grey stallion.

Bronze went to the chestnut KWPN gelding Coursy (Carthino Z x Guidam) ridden by the successful young Dutchman, Gerben Morsink, who has now taken five medals at the FEI World Jumping Championships for Young Horses. Morsink, who has a degree in Bio-Chemistry and an MBA, also competes Coursy’s sire and dam, and yesterday lined up third in the FEI Zangersheide Sires of the World Grand Prix with Carthino Z.

There were just two double-clear performances in the Six-Year-Old Championship, and it was a close-fought affair between the stallion Gangster de Longchamps (Orlando x Sheyenne de Baugy) who came out on top for Colombia’s Dayro Arroyave and silver medallist Charlotte Bettendorf with another Belgian Warmblood, the gelding Goya van de Begijnakker (Wandor van de Mispelaere x Palestro vd Begijnakker). Just 0.11 separated the pair in the race against the clock while the Oldendurg mare, Carthagena 6 (Cornet Obolensky x Landor S), claimed the bronze with the fastest four-fault result in the second round with Brazil’s Marlon Modolo Zanotelli on board.

From a starting field of 40 there were 13 first-round clears, and winning rider, Arroyave, had three horses qualified for the final, two making it into the jump-off. This was a comparatively light day’s work for the Colombian rider who has been domiciled in Belgium for many years and is a prolific producer of good young horses, because he has been known to bring 30 horses to the Belgian Championships.

After clinching the gold, he pointed out that his winning stallion is not the easiest ride. “A lot of riders have fallen off him and he’s not always easy to control but he makes up for that with really quality in his jumping” said Arroyave who has been competing with Gangster de Longchamps for the last six months – “for me he seems to go!” the rider quipped. Owner, Michel Rigo, advised him to take the longer route over the jump-off course in which there was a difficult turn that proved pivotal. A clear would guarantee the silver medal, but Arroyave couldn’t resist the temptation to go the shorter route and snatched victory from Bettendorf when last into the ring.

Luxembourg rider Bettendorf, who is based in Germany, competes with horses owned by her father and other clients including Stephex Stables. “My horse (Goya van de Begijnakker) has been jumping clear all year but we had one down in the second qualifier here (at Lanaken). A lot of horses made mistakes in that class so we qualified for the final. The horse was bought this summer and his jump is not a problem but balance is something we still have to work on, but I’m very happy!” she said, having taken the silver medal.

The grey mare, Carthagena 6, who took bronze for Brazil’s Zanotelli with a super-fast four-fault performance in the second round, is jointly-owned by Jos Lansink Horses and Ashford Farms. She was only broken in October 2011 having already had two foals, and made her debut on the international circuit at the Spanish Sunshine Tour earlier this year. Zanotelli, who works for Ashford Farms’ Belgian operation, previously worked with Ludo Philippaerts for two years. Talking about Carthagena the rider said “she is still green but shows a lot of promise”.

Mares dominated the Seven-Year-Old division with the Oldenburg, Chacciana (Chacco-Blue x Andiamo Z) ridden by Florian Meyer zu Hartum for Gestut Lewitz pipping Curley Sue 39 (BAY) which is by Caratello B x Ladinos with fellow-German Rene Tebbel in the saddle. The bronze went to the KWPN gelding Argos (Padinus x Concorde) with Dutchman Mathijs van Asten on board.

There were 41 starters here, and five first-round retirements as the tough track took its toll, but there were problems all around the course, particularly at the large open water. Only four jumped clear first time out, two horse-and-rider partnerships missing out with just a single time penalty, and just the gold and silver medallists jumped double-clear in the final analysis. Arguably the unluckiest rider of the day was Ireland’s Jessica Kuerten who made it into the jump-off with the KWPN stallion Arezzo VDL only to catch the standard of a fence with her foot as she galloped against the clock for an unfortunate four faults which left them just outside the medal placings.

Meyer zu Hartum’s winning ride previously competed at these Championships as a five-year-old, producing the quickest round in the final but hitting the last fence to miss out on the honours that time around. Asked if the mare will be sold at the PSI Sales in December at Ankum in Germany, the rider who works for Paul Schockemohle said he was unsure, but that some embryo transfers had already taken place.

Tebbel said he had done just two big shows with Curley Sue 39, at Aachen this summer after which she went back to her owner, and then these Championships. “She will stay with me now” the rider explained, “and after a short rest she will start the Youngster Tour in Hannover”.

Van Asten’s gelding was sold to Sweden as a foal and the Dutchman bought the horse there last year. He described the gelding as “quite green” and when asked if Argos was for sale replied – “I’m working independently so I take a risk if I keep him but I’d like to keep him if I can”.

It total there were 800 horses in action at this year’s FEI World Jumping Championships for Young Horses which drew a massive crowd of 100,000 spectators over the five days of exciting competition.