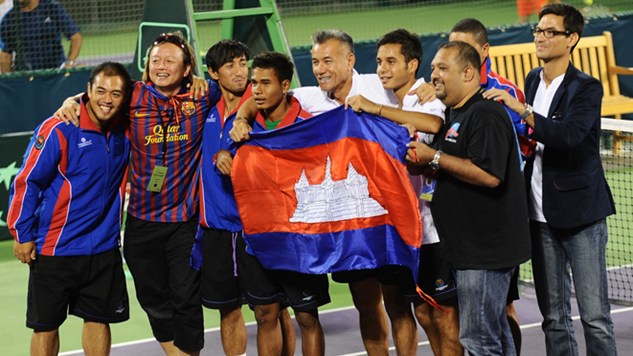 Cambodia win promotion to 2013 Davis Cup Asia/Oceania Zone Group III, where they will be joined by United Arab Emirates, who defeated Qatar 2-1 in Saturday’s other promotional play-off.

Cambodian team captain Tep Rithivit, said: “It has been such a long journey and we’ve worked so hard. We felt like the dark horses coming into this event – but very prepared dark horses. All that work has really paid off and it means so much to move on to the Group III stage. Imagine what we have achieved in our first season with less than 30 tennis courts in the whole of Cambodia. The complex in Doha has 27 courts. That puts this amazing feat in perspective. It is such an inspiration for all the tennis playing kids back home.”

Tournament Director, Saad Al Mohannadi, said: “The Davis Cup by BNP Paribas Asia/Oceania Zone Group IV event here in Qatar brought together ten very different teams all with the same goal – to play for their country and showcase their abilities. We had wonderful round-robin match play all week long and the play-offs today were nothing short of superb as all the players put 100 per cent effort into moving on in the world standings.”