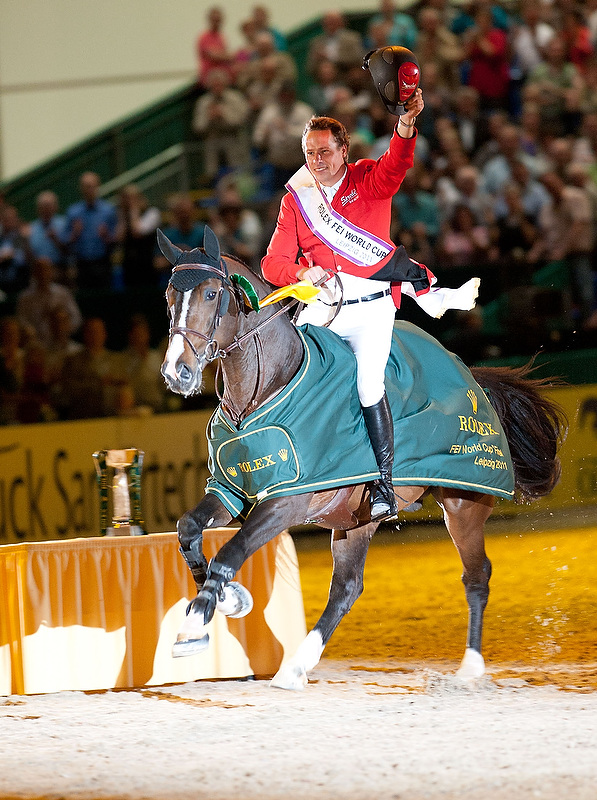 By: Louise Parkes, April 19, 2012: Belgium’s Rik Hemeryck will be pathfinder as the Rolex FEI World Cup™Jumping Final 2011/2012 gets underway at the Brabanthalle in ‘s-Hertogenbosch, The Netherlands tomorrow. The draw for the opening Speed class took place this evening, and the order-of-go is as follows:

To be in with a real chance of taking the coveted title, riders will be striving for a prominent position on the leaderboard after the first event which is followed by a Table A competition with a timed jump-off on Friday. The top two-thirds of competitors will then go forward to Sunday’s two-round final from which the Rolex FEI World Cup™ Jumping champion for 2011/2012 will emerge.

The winner will be the 34th champion in the long and distinguished history of the series which was the brain-child of Swiss journalist, Max Amman, and had its inaugural Final in Gothenburg, Sweden in 1979 where Austria’s Hugo Simon and Gladstone came out on top.

The title-decider has been held in the The Netherlands just once before, in 1994 when Jos Lansink, then competing for the host nation but now flying the Belgian flag, won ahead of Germany’s Franke Sloothaak in second and Great Britain’s Michael Whitaker in third. The legendary Whitaker brothers, Michael and John, have a phenomenal attendance record at the FEI World Cup™ Finals down the years, but there will be no British representation at the 2011/2012 showdown.

Germany’s Christian Ahlmann is defending the title he won with the stallion, Taloubet, last year on home turf in Leipzig and they will have the benefit of a good draw when 27th into the arena. German riders will be hoping to set a new record by scooping the trophy for the fifth consecutive season.

Riders from 13 leagues around the globe competed towards qualification for the Rolex FEI World Cup™ Jumping Final 2011/2012 in which 19 nations field a total of 37 competitors. All horses passed today’s first veterinary inspection and there was an interesting result to the afternoon Warm-Up class in which pole position went to Qatar’s Ali bin Khaled Al Thani and the 10 year old gelding Sieshof’s Abraksas.

Runner-up was America’s Kirsten Coe and the stallion Combina who were more than five seconds adrift of the winning time, while third place went to the partnership who won the last qualifying leg of the Rolex FEI World Cup™ Jumping Western European League series in Gothenburg, Sweden at the end of February, Germany’s Marco Kutscher and Satisfaction FRH. Kutscher said then that he intended to use this dark bay stallion in the opening Speed leg at the Final, and he will be hoping to secure a similar spot in tomorrow’s opener. The luck of the draw was kind to him too, and he will be third-last into the arena.

As expected, the German contingent are already flexing their not inconsiderable muscle even before the main action begins.

Tomorrow’s first leg of the Final takes place at 19.15 local time, and the second leg follows on Friday evening at 19.00 while the deciding competition will get underway next Sunday afternoon at 14.00 hours. Don’t miss a hoofbeat – watch it all LIVE on FEI TV! www.feitv.org