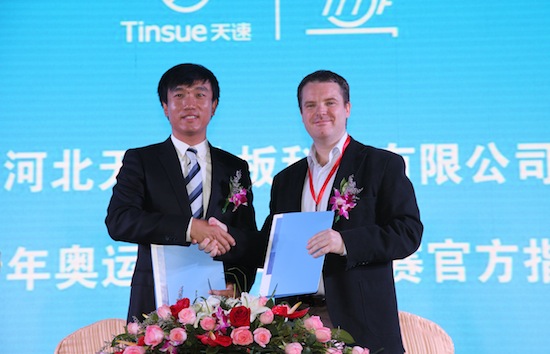 Lausanne, Feb 04, 2013: China’s Hebei Tinsue Floor Technology Co., Ltd has been announced as the Official Sports Floor Supplier to the 2014 Nanjing Youth Olympic Games Table Tennis event. In addition, to show their commitment to the development of Table Tennis globally, Tinsue will support the Continents with Marketing agreements with the ITTF, providing Sports flooring to the African, North American, Latin American and Oceania events for 2013 and 2014.

“Tinsue is a relatively new player in providing Sports Flooring Sponsorship to the ITTF but are fast becoming one of our key partners”, remarked Steve Dainton, ITTF Marketing Director. “It is with great pleasure that we announce Tinsue as sponsor of the 2014 Nanjing Youth Olympic Games, namely – Official Sports Floor Supplier to the Table Tennis event. After an extremely successful 2012 London Olympic Games where both Tinsue and the ITTF built on their relationship we were very confident that by choosing Tinsue, a Chinese company, for an Olympic event in China, that the event will also be a true success.”

“As well, we are pleased to announce that Tinsue will support for 2 more years the Continents with Marketing agreements with the ITTF, providing Sports flooring to the African, North American, Latin American and Oceania events for 2013 and 2014, which shows to prove they are true supporters of table tennis.”

Adham Sharara, ITTF President also added that “the ITTF is extremely pleased with Tinsue’s continuous support of ITTF events. The brand “TINSUE” has become synonymous with top quality sports flooring, and of course as the table tennis Olympic sports floor. The agreement for the 2014 Youth Olympic Games further strengthens the relationship between Tinsue and the ITTF, and will provide to the young athletes taking part in the YOG in Nanjing a top quality sports floor for peak performance.”

Since 2003 when we were founded, our company has emphasized on continuous innovation, redearch and development under the principle of “regarding quality as life and credibility as fundamental”. We have developed a system of diversified products which are applicable to badminton court, table tennis court, basketball court, tennis court, volleyball court, comprehensive sport field, gymnasium, shopping mall, store, office building and hospital, etc.