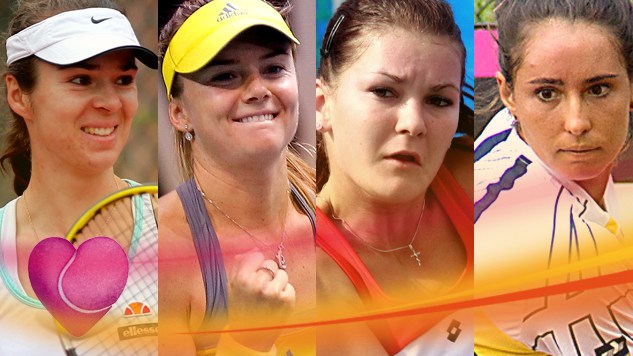 The four Heart Award recipients were decided by a public vote onFedCup.com and FedCup.com/es that saw over 23,000 fans make their selection. Ten players were initially shortlisted by a judging panel consisting of ITF President Francesco Ricci Bitti and a group of former Fed Cup players and members of the international media. All the winners receive a cheque to be donated to their chosen charity.

ITF President Francesco Ricci Bitti said: “There were some outstanding performances during the Fed Cup ties in February, so I would like to congratulate all four players for coming out on top of the public vote. The Fed Cup Heart Award continues to reward players for the commitment they make to their team and the competition as a whole. I am sure that all the winners will take great pride in making their donations to charity.”

The Fed Cup Heart Award is an ITF initiative that was first presented to USA’s Melanie Oudin at the 2009 Fed Cup Final. It aims to recognise players who have represented their country with distinction, shown exceptional courage on court and demonstrated outstanding commitment to their team. A total of five players will be recognised in 2013.

Daniela Hantuchova was largely responsible for clinching Slovak Republic’s World Group first round victory over Serbia after her compatriot Dominika Cibulkova was forced to retire midway through her match on the opening day. The Slovak No. 2 used all of her experience to help her team reach the World Group semi-finals for the first time since 2002 by defeating Bojana Jovanovski 75 62 and Vesna Dolonc 63 62.

Agnieszka Radwanska carried her team out of Europe/Africa Zone Group I and into the World Group II play-offs after winning all six of her rubbers in Eilat, including two decisive doubles matches against Israel and Croatia. The world No. 4 managed to deal with the weight of expectation and showed that Poland will be difficult to defeat this weekend.

Galina Voskoboeva left little doubt as to her commitment to Kazakhstan after her performances in the doubles helped the host nation win Asia/Oceania Zone Group I and earn a place in the World Group play-offs for the first time. The 28-year old also became Kazakhstan’s best Fed Cup player ever, after her three victories increased her total win-loss record in the competition to 18-6.

Paula Cristina Goncalves won all five rubbers she played for Brazil as her team narrowly failed to qualify from Americas Zone Group I. Her four singles wins included a comeback victory from a set down against Sharon Fichman in the promotion play-off against Canada, and she also teamed with Teliana Pereira to win the only doubles rubber she contested.

Fed Cup by BNP Paribas is the largest annual international team competition in women’s sport, with 97 nations entered in 2013. The event is celebrating its 50th birthday in 2013 in the ITF’s centenary year. The title sponsor is BNP Paribas, the Official Bank of Fed Cup. Adecco (Official HR Sponsor) and Bosco Sport (Official Clothing Sponsor) are international sponsors, and Wilson Sporting Goods (Official Ball) is an international partner. Follow all the action onwww.fedcup.com, www.fedcup.com/es, www.twitter.com/fedcup and www.facebook.com/FedCup.

To be presented at the Final World Group semi-finals