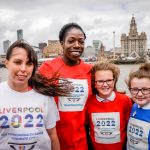 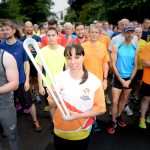 During the day, the Relay visited the world famous Albert Docks, where it passed the Clipper Round the World Yacht Race teams as they prepare for their landmark departure tomorrow, August 20, before stopping at the Beatles Statue on route to a Mersey Ferry round trip across the city’s iconic waterfront.

The Baton also visited Chavasse Park in Liverpool ONE where people of all ages could try their hand at Commonwealth sports for free. There are various sports on offer at the park throughout the summer such as a 100m running track, table tennis, artistic gymnastics and long jump.

Some of the region’s biggest sporting names, including 4x400m star Anyika Onuora and Commonwealth Games gold medal-winning gymnast Beth Tweddle, also joined the fun, posing for selfies with members of the public as well as signing autographs.

The centrepiece of the visit, however, saw the Baton take to the world famous Anfield pitch at half time during Liverpool FC’s first Premier League home fixture of the season, against Crystal Palace.

Alongside the relay, Beth Tweddle took part in an interview with Commonwealth Games Federation (CGF) President Louise Martin and LFC TV, which was projected around the full 54,000-seater stadium, while a Liverpool 2022 banner was draped across the halfway line of the pitch.

With a full stadium and millions of eyes tuned in from around the world, the Baton saw the truly international reach of Liverpool’s sporting heritage.

The Baton, which will travel through 69 countries before it arrives in Australia in time for the 2018 Gold Coast Commonwealth Games, arrived in England on August 16 from the Americas and departs for Scotland on August 22.

It will travel through another 30 countries throughout Asia and Oceania before arriving for the Opening Ceremony of Gold Coast 2018 on April 4 2018.

“What a fantastic sight to see our entire city celebrating the Commonwealth Games and all they have to offer. The appetite for the Games here is immense and today’s Baton Relay really serves to prove that.

“The Baton visiting Anfield, one of the planets most recognisable and watched sports arenas, was a special moment.

This city, recently named as the #1 Sporting City in the UK, has a sporting reach that is unparalleled across the world and with the global support of our famous clubs, our iconic waterfront and an innovative venue plan we know we can deliver a truly international and transformational Commonwealth Games in 2022.” 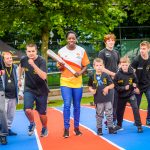 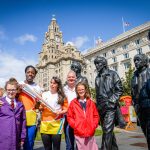 “Liverpool lives and breathes sport, and that really showed today with so many people coming out to show their support for both Gold Coast 2018 and Liverpool 2022. There is a real excitement in the city for the Commonwealth Games and it was great to show this off today.

“Liverpool 2022 will transform this city, and it will help fast-track up to a billion pounds of investment.

It is a win, win, great for the city and the perfect place to showcase, through our world famous sports, music and cultural brands, world-renowned locations and trading heritage, international Britain and a re-invigorated Commonwealth Games.” 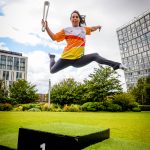 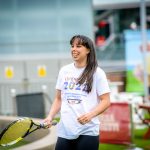 Olympic swimmer, Fran Halsall, added:
“What an amazing moment for me to walk out here at Anfield representing the Commonwealth Games and my world famous city’s bid for them in 2022.

When you walk on to the pitch you immediately feel the passion Liverpool has for sport, and it would be amazing to see that energy channelled into the Commonwealth Games in 2022.

“As an athlete, bringing the Games to Liverpool would make so much sense, and as a swimmer, it makes even more! The plans for an innovative drop-in swimming arena along our iconic waterfront are just one of the many venue concepts that make this Games special.”