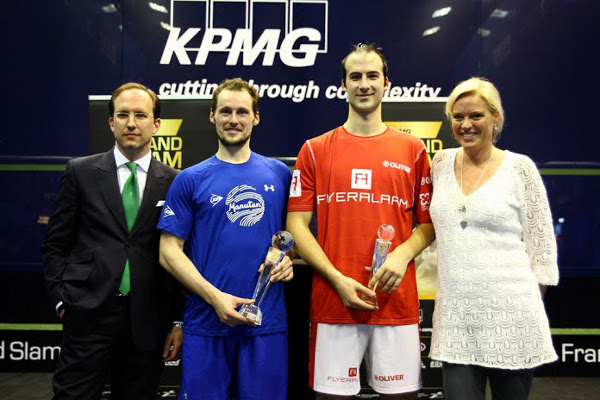 World No12 Rosner, the seven-time German national champion from Paderborn, had earlier sprung the event’s biggest surprise by beating top seed Ramy Ashour, the world No1 and world champion from Egypt, 11-9, 6-11, 1-0.

The 25-year-old delighted the crowd by winning the event’s unique best-of-one third game decider with a dead nick in the court’s side wall – thereby earning his career-first victory over Ashour.

The other semi-final also went the full distance, with third seed Gaultier winning the all-important third game rally against world No2 Nick Matthew when the Englishman’s shot was called ‘not up’ by the officials.

“I chose the wrong side to serve,” said Matthew who had earned the service to start the decider after winning the second game.

Rosner took the first three points in the final, but Gaultier then won seven in a row to build up an insurmountable lead.

The German led 7-2 and 9-6 in the second game – then had game-ball at 10-9. But the wily Frenchman blocked out the sound of the jubilant German crowd – who clearly sensed another dramatic decider – by holding his nerve to close out the match 11-7, 11-10 in 30 minutes.

“It’s amazing to play in front of such a great crowd,” said 30-year-old Gaultier as he clutched his latest trophy. “I am very happy to have done well here.”

Ashour, who won the best-of-one-game third-place-play-off against Matthew, said: “It’s good to be back in Germany, where I first played Simon as a junior.

“This has been a fantastic event – from the second I stepped onto the court. It’s an amazing venue, an amazing set-up and an amazing crowd.”

On his role as an Olympic ambassador for the sport, Ashour admitted that he felt proud to be part of the World Squash Federation team which will present the sport’s bid to join the Olympic Games programme in 2020 to the IOC in St Petersburg later this month

“It’s a great thing to do. I think squash belongs in the Olympics and I hope we will be able persuade the IOC at the meeting in a few weeks.”

KPMG regional board member Holger Kneisel also endorsed Ashour’s statement: “After seeing these players give us such an impressive high-class event tonight, I also really hope that squash will be in the Olympics in 2020.”

John Nimick, co-founder of the championship with the Welldone Agency in Frankfurt, summed up the success of the maiden event: “The KPMG Grand Slam Cup represents so many great elements of our sport. It highlights an iconic location, it brings together the world’s very best players, and it celebrates squash in a festival setting.

“The audience has been outstanding – and have provided a great atmosphere and the perfect start to an annual championship featuring four of the best players in the world battling against each other in a single evening.” —- Picture by Jordan Mansfield.