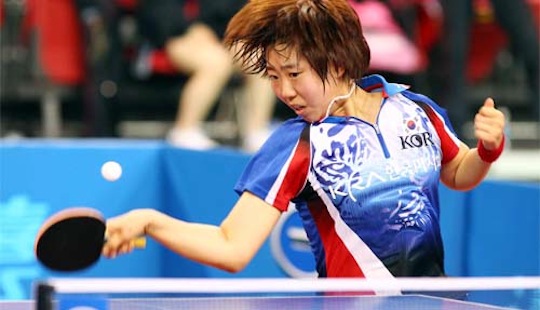 Matters commenced on Wednesday 29th August 2012 with the qualification stage of the Men’s and Women’s Singles events but for Patrick Baum and Yang Haeun, they have two days to wait before they start their quest in the singles events. Both have enjoyed success internationally but neither as yet owns a Men’s or Women’s Singles Tour title.

No Men’s or Women’s Singles titles for the top seeds as yet but there are players on duty who have gained that distinction. Notably in the Men’s Singles event there is Korea’s Lee Sangsu and Russia’s Fedor Kuzmin, in the Women’s Singles competition Jeon Jihee, also from Korea and Austria’s Liu Jia.

Undoubtedly, the player to watch amongst those celebrated names is the supremely athletic Lee Sangsu, the young man who can dazzle. He owns a special place in the history books being the only player to win a Tour Men’s Singles title and start life in the qualification stage of proceedings; it was in Slovenia in 2010 that he achieved the feat. One year later he won again in Poland.

Two titles for Lee Sangsu; for Fedor Kuzmin it is one. He succeeded on the first ever occasion that the Slovenian Open joined the ITTF Pro Tour; he won in Velenje in 2005.

In Olomouc, Lee Sangsu is the no.3 seed in the Men’s Singles event; Japan’s Kazuhiro Chan is the no.2 seed with Kenji Matsudaira, also from Japan, bein g the no.4 seed. Fedor Kuzmin is further down the list at no.19.

A total of three Men’s Singles title amongst the entries in the Czech Republic; it is the same for the women. Jeon Jihee won in 2012 in Rabat at the Hasan II Morocco Open whilst Liu Jia succeeded in Brazil in 2004 and four years later in Germany. In the Women’s Singles event at the GAC GROUP 2012 ITTF World Tour Czech Open, Jeon Jihee is the no.2 seed, Liu Jia is the no.4 seed, one place below Sweden’s Matilda Ekholm.

However, when it comes to success in recent times on Tour, few can compare with the Japanese partnership of Hiroko Fujii and Misako Wakamiya. In little over a year they have collected four Women’s Doubles titles.

In 2011 they won in Korea and Japan; this year in Chile and again in Japan; in Olomouc they are the no.1 seeds with Korea’s Park Youngsook and Yang Haeun occupying the second seeded place.

Japan to the fore in the Women’s Doubles; it is the same in the Men’s Doubles event; Hiromitsu Kasahara and Kenji Matsudaira are the top seeds followed by colleagues Kazuhiro Chan and Taku Takakiwa.