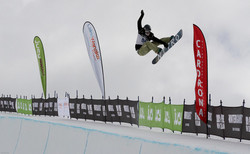 In less than ten days, the FIS Freestyle Skiing and Snowboard World Cups will begin a new season. From 16th-24th August, the 2013/2014 winter will debut in New Zealand with contests in slopestyle and halfpipe.

A “who’s who” of the world’s best riders will be heading to the event including reigning Olympic Champion and world snowboarding legend Shaun White of the United States. Still regarded by many as world number one in halfpipe, he will face stiff competition from the likes of Iouri Podladtchikov of Switzerland and Finland’s Markus Malin. The FIS Snowboard slopestyle World Cup start list also includes Malin’s compatriots Roope Tonteri, 2013 World Champion, and Peetu Piiroinen, 2010 Olympic silver medallist in snowboard halfpipe. On the ladies’ side, 2010 Olympic halfpipe Champion Torah Bright of Australia will be heading the field, while compatriot Arielle Gold, 2013 World Champion will battle it out against Sophie Rodriguez (FRA) and Holly Crawford (AUS), among others, in the slopestyle event.

In the Freestyle category, reigning slopestyle World Champion Tom Wallisch and his teammate Gus Kenworthy of the United States, in addition to 2013 FIS halfpipe World Cup Champion Mike Riddle of Canada are among the elite entries. Notable registrations in the ladies’ category include 2013 FIS slopestyle World Cup Champion Keri Herman of the United States and her teammate Devin Logan who triumphed in the halfpipe World Cup in Cardrona last year.

The Cardrona events in both Freestyle Skiing and Snowboard are the first competitions of the respective FIS World Cup tours in the 2013/14 season and also count for the official qualification for the 2014 Olympic Winter Games in Sochi (RUS). —- FIS