Tokyo (JPN), Nov 21, 2016: Landmark Olympic, Olympic formats were the key topic at the FEI General Assembly session in the Japanese capital this afternoon ahead of tomorrow’s crucial vote on the formats for the three Olympic equestrian disciplines at the Tokyo 2020 Olympic Games. 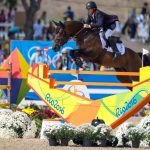 Close to 300 delegates, representing 76 of the FEI’s 134 National Federations, engaged in the final debate to conclude a two-year consultation process about proposed changes to the three disciplines designed to increase universality, one of the key requirements under Olympic Agenda 2020. A further 31 National Federations will be voting by proxy, increasing the number of votes to 107.

The proposals aim to make the equestrian events more readily understandable and packaged in a more compact format, engaging new fans through enhanced presentation of the sport.

The key proposals for change across the three Olympic disciplines – Jumping, Dressage and Eventing – and Para-Equestrian Dressage at the Paralympics are to have three athletes per team. The drop score, which previously allowed for a team’s worst score to be discarded, would be removed under the new proposals. National Federations will also vote on the inclusion of one active reserve combination for substitution possibilities at the Olympic Games.

These proposals will all be voted on together during tomorrow’s General Assembly, with the proposed discipline specific changes and the Paralympic revisions all to be voted on separately.

Delegates at today’s session were given a final chance to debate the issues, with opinions voiced both for and against the proposals for change.

German National Federation Secretary General Soenke Lauterbach spoke against, but made it very clear that Germany will respect the democratic process. “We understand the desire to get more universality in the Olympic and Paralympic Games, but it has to be balanced with the core principles of our sport, that we have top athletes, top level sport and in line with horse welfare requirements. We do not feel that with three per team we have the right balance of these three principles and that is why we will vote against tomorrow, but we will accept and work with whatever decision is made.”

The FEI President Ingmar De Vos provided details of the timeline for implementation of the Olympic formats prior to Tokyo 2020:

Speaking after today’s session, the FEI President said: “We are a sport with 134 National Federations, and it’s correct that only a limited number of them compete at elite level, but we can only be ambitious and get more National Federations to compete at the top level if we can offer them an avenue for development. The decision is now in the hands of our National Federations and whatever way the vote goes tomorrow, we will make it a success.” —- Arnd Bronkhorst/FEI