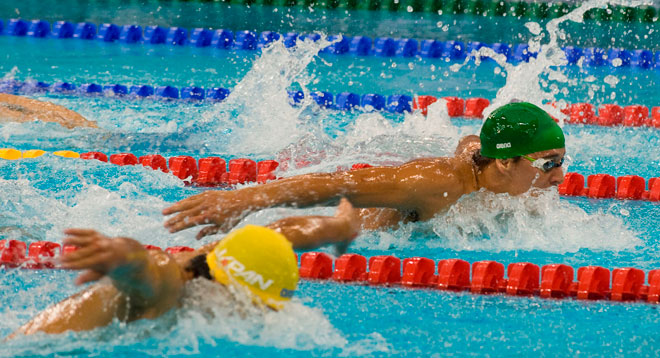 Lausanne, Oct 03, 2012: The FINA/ARENA Swimming World Cup is underway at Dubai’s Hamdan Bin Mohammed Bin Rashid Sports Complex from October 1-2 where 190 swimmers from more than 30 countries are competing. The 2012 eight-leg series kicked off with some heavyweights of the international swimming stage making a splash on the first day of competition. Here are some highlights from day 1:

The evening’s biggest reception was reserved for young sensation Chad Le Clos from South Africa, who took out the men’s 200m butterfly (his signature event) in 1:51.61, after facing pressure from Japan’s Daiya Seto. Fresh from his gold medal in the same event at the London Olympics this summer, the 20-year-old is chasing a second World Cup title to add to his roll of honour.

Country mate Cameron van der Burgh, Olympic champion and World record holder in the 100m breaststroke, is no stranger to the World Cup series, having won the event’s 2008 and 2009 editions. Van der Burgh took out the 50m breastroke in 26.64, ahead of teammate Guilio Zorzi and Glenn Snyders from New Zealand.

The other African star to shine at this first session of finals was Kenya’s Jason Dunford, who swept the 50m butterfly in a time of 22.77. South Africans Le Clos and Roland Schoeman took silver and bronze, respectively.

The only male swimmer to walk away with two victories that evening was Australian Kenneth To, claiming the 100m freestyle and 100m individual medley.

The best performers in the women’s field were Katinka Hosszu from Hungary and Sweden’s Therese Alshammar. The distance specialist did not disappoint the Hungarian audience watching back home as she claimed the top spot in the 800m freestyle, 200m freestyle and 200m individual medley. She also finished third in the 200m backstroke, which was won by Ukrainian Darya Zevina.

Still-competitive Alshammar, owner of a record four World Cup titles (2006, 2007, 2010 and 2011), was the fastest in the 100m butterfly and 50m freestyle. Compatriot Jennie Johansson pocketed the 100m breaststroke while Australian Rachel Goh took gold in the 50m backstroke.

In relay action, the inaugural 4x50m mixed medley relay race was won by the German team, followed by Hungary and the Ukraine. —- FINA