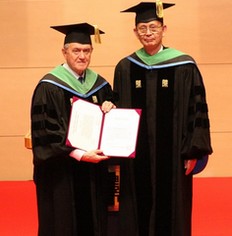 A national-level gymnast as a teenager, coach and selector for Italy’s Men’s team, President of his federation, Vice-President of the Italian NOC, recipient of the Grand Officer of the National Order of Merit distinction, international judge and FIG President since 1996, Bruno Grandi has devoted his entire life to gymnast education and preservation, the reform and development of national and international structures and the fight for sport justice. He is unanimously applauded by his colleagues for his experience, integrity and enthusiasm.

In his speech, Prof. Grandi expressed a commitment to taking up the challenge faced by gymnastics, particularly in terms of ethics and the development of the discipline’s artistic content. “My gratitude to Japan’s sport and scholarly authorities; I applaud the immense gymnastic culture and tradition that your country continues to foster today. This title honours the international gymnastics community to which I have devoted my entire career, and which I continue to serve. I am proud of how far we’ve come, and look forward to the objectives and mission I have embraced and with which the 130 FIG affiliated federations have entrusted me through a new mandate at the head of the FIG,” said the President at the close of the ceremony. —- FIG / Image © NSSU