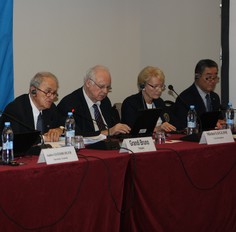 Lausanne (SUI) &St Petersburg (RUS) / FIG Office, May 18, 2012: Summary of the main decisions and information released by the FIG Executive Committee at its ordinary meeting of May 16 – 17, 2012, in St Petersburg (RUS), at the Sokos Olympic Garden Hotel.

• As a provisional decision, the Executive Committee will give the possibility to tall gymnasts to raise the horizontal bar of 10 cm, at the next Olympic Games in London 2012;

• At the issue of the Sportaccord Convention in Québec (CAN), FIG President Grandi will be the guest of the Cirque du Soleil in Montreal (CAN), to renew and sign a cooperation agreement;

• The Executive reviewed the list of the items to be presented and discussed at the next FIG Congress to be held in Cancun (MEX), in October;

• The Artistic Gymnastics Russian judges Ivanova Lidia, Terkhina Raisa and Kerdemilidi Valeri, who have ended their judging activities, will be awarded with the FIG Diploma of Honour, a prestigious distinction for 20 years of successful cooperation;

• The Executive will submit to the Council Members the request of a provisional affiliation of the Federation of Benin (BEN);

• The FIG Judges’ Rules and the specific Judges Rules have been updated and accepted;

• The FIG Medical Rules in competition have been revised and accepted;