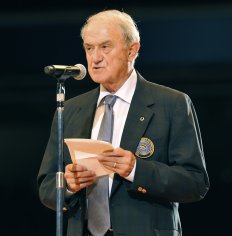 FIG President Prof. Bruno Grandi (ITA), who runs for a fifth term and has gone unopposed at previous elections, will be challenged for the presidency by Adrian Stoica (ROU) and Vassily Titov (RUS). Mr Stoica currently holds the position of FIG Men’s Technical Committee President, while Mr Titov has been a member of the Executive Committee since 2009 and is also a member of the Marketing Commission.

Though Sensei Koji Takizawa (JPN) is not running for office again, current Vice-Presidents Dr Michel Léglise (FRA) and Ms Slava Corn (CAN) have been presented for re-election. They are joined by candidates Mr Wolfgang Willam (GER), Mr Saif Abouedel (KUW), Mr Vassily Titov (in the event that he is not elected President) and Mr Atilla Orsel (TUR) for the vice-presidency.

Of the seventeen candidates for the Executive Committee, eleven represent new candidatures. A total of thirteen out of the 25 available seats on the FIG Executive Board will be determined by direct vote.

As for the Technical Committees for competitive disciplines and the Gymnastics for All Committee, all current presidents are running for an additional term, with the exception of Rhythmic and Acrobatic Gymnastics. Mr Stoica is challenged for the position of Men’s TC President by Mr Steve Butcher (USA), while Ms Nellie Kim (BLR) (Women’s TC), Mr Horst Kunze (GER) (Trampoline TC), Ms Mireille Ganzin (FRA) (Aerobic TC), and Ms Margaret Sikkens Ahlquist (SWE) (Gymnastics for All Committee) are unopposed in their candidatures. With Poland ineligible to present candidates to this year’s Congress, Ms Maria Szyszkowska (POL) will step down as President of the Rhythmic Gymnastics TC at the end of 2012. Current TC members Ms Daniela Delle Chiaie (ITA) and Ms Nataliya Kuzmina (RUS) stand for her succession. In Acrobatic Gymnastics, TC member Ms Rosy Taeymans (BEL) runs for the position as TC President, and current TC President Ms Tonya Case (USA) is listed as a TC member candidate.

Candidates for the FIG Appeal Tribunal are identical to the current members, with the exception of Ms Sabrina Klaesberg (GER), who resigned from the position earlier this year, and Mr Giuseppe Artiaco (ITA), who passed away in October 2010.

Mr Ron Froehlich (USA) is the sole candidate for the position of auditor and Mr Vincent Bernasconi (SUI) is nominated as the professional auditor for the federation.

In total, the FIG received 135 valid candidatures (including candidatures from a single individual for multiple positions) from 55 different member federations for a total of 90 open positions. The FIG currently counts 128 affiliated and three associated federations, of which a total of 115 were eligible to present candidatures for the 79th Congress in Cancun. —- FIG