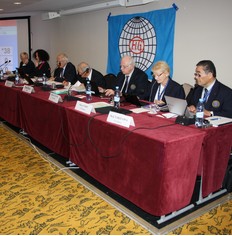 Lausanne (SUI)/FIG Office, May 21, 2012: Summary of the key decisions and information released by the FIG Council at the close of its ordinary meeting of May 18 – 19, 2012, at the Sokos Hotel Olympic Garden in St Petersburg (RUS).

• The Council ratified all additions and modifications to the Technical Regulations as proposed by the Executive Committee.

• FIG simplified the tie-breaking procedures for the Olympic Games. The document has been approved and comes into effect immediately.

• The 2011 accounts and auditors’ report have been accepted. The President invites members to take a very cautious approach to cost management in a precarious and uncertain economic climate.

• The federations of ALB, BOT, CYP, INA, JAM, KAZ, MKD, PAR, POL, SEY, SYR, TJK, YEM may participate in the upcoming Congress this October but will be unauthorized to make proposals, present candidates or exercise their right to vote, as per article 7 of the Statutes approved by the 2010 General Assembly in Vysoké Tatry (SVK).

• The Council accepts the provisional admission of the federation of Benin (BEN). The General Assembly has jurisdiction for the final decision.

• This year the FIG celebrates the tenth anniversary of its Gymnastics Academies. The courses have flourished since their creation in Kuala Lumpur in 2002, 14 academies having run internationally for 2012 alone.

• In keeping with the rule of rotation, the FIG Council will be held within the borders of the European Gymnastics Union (UEG) next year. British Gymnastics and the City of Liverpool will host the 13th edition in May 2013.

• The Norwegian Federation and the City of Vestfold are the designated country and city respectively to host the 3rd edition of the World Gym For Life Challenge in July 2017.