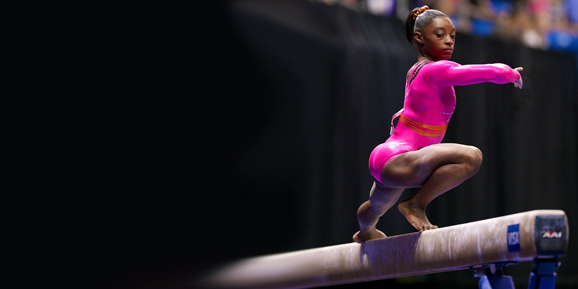 INDIANAPOLIS (USA) – LAUSANNE (SUI), Feb 26, 2013: Katelyn Ohashi and Simone Biles will represent the USA at the 2013 AT&T American Cup in Worcester (USA), scheduled for March 2 at 11:30 a.m. ET. at the DCU Center. 2012 Olympic team gold-medalist Kyla Ross (USA) has withdrawn from the competition because she is recovering from a bruised heel. The AT&T American Cup is an International Gymnastics Federation World Cup event.

“Kyla has been nursing a bruised heel for several weeks and reduced her training to allow it to heal,” said Steve Penny, president of USA Gymnastics. “Kyla’s heel is much better, however she is not ready to compete on four events at this time, and her safety is of the utmost importance.

“The American Cup has a history of introducing new faces to the world,” said Penny, “and both Katelyn and Simone are ready to go in their first international event as seniors. This is an exciting moment for them and for USA Gymnastics, and we look forward to welcoming two bright and talented athletes to this level of competition.”

Ross will travel with the delegation to Worcester to support her teammates and be a part of the weekend. Although she has officially withdrawn from the competitive field, Ross may perform an exhibition routine on the balance beam, which will be decided in Worcester.

Ohashi had international success as a junior. In 2012, she won the junior all-around, uneven bars, balance beam and floor exercise gold medals, as well as helped the U.S. team to the team title at the Kellogg’s Pacific Rim Championships. She also was on the gold medal team at both the 2011-12 City of Jesolo Trophy competitions, as well as three individual junior gold medals (2012 – uneven bars, balance beam; 2011 – floor exercise.

Biles is making her international debut at the AT&T American Cup. At the 2012 Visa Championships, she won the junior vault title and was third in the all-around. She also won the junior all-around title at the 2012 U.S. Secret Classic.

The AT&T American Cup, a part of the FIG’s all-around World Cup series, kicks off the road to the 2016 Olympic Games in Rio de Janeiro, Brazil. The field features many of the top athletes from last summer’s Olympic Games in London, including the USA’s Danell Leyva of Miami/Universal Gymnastics, who won the Olympic all-around bronze medal, and his Olympic teammate Jake Dalton of Reno, Nev./University of Oklahoma.

Canada’s Maegan Chant is replacing Japan’s Koko Tsurumi, who withdrew due to injury. The complete field is as follows.

Tickets for the AT&T American Cup range in price from $39.50-$150 and may be purchased by phone at 800-745-3000; online at www.ticketmaster.com; at all Ticketmaster outlets; or at the DCU Center Ticket Office. Ticket prices include facility fees and taxes but do not include convenience fees.

The AT&T American Cup, one of the most prestigious international invitationals, features many of the world’s top all-around gymnasts. The 2012 champions were Jordyn Wieber of DeWitt, Mich./Gedderts’ Twistars USA, who was a member of The Fierce FiveSM (2012 Olympic team champion), and Leyva. The American Cup was held in Worcester in 2010 when Rebecca Bross of Plano, Texas/WOGA, won the women’s title, and Russia’s Maxim Devyatovskiy took top honors for the men.