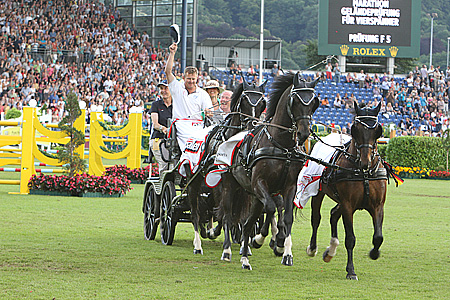 By Cindy Timmer, Aachen (GER), 8 July 2012: FEI World Cup, Boyd Exell, the reigning FEI World four-in-hand and four times FEI World Cup™ Driving champion, has won the prestigious Driving competition in Aachen (GER) for the fourth consecutive time. Added to his victory in 2003, Boyd’s name is now on the leader board in Aachen five times. The Dutch team also continued their dominance and won the nations competition for the sixth consecutive time.

It wasn’t until the marathon though, which was the final phase for the individual rankings, that it became clear that Boyd Exell would win again. US driver Chester Weber was in a very comfortable lead after a superb individual dressage test. Weber set an Aachen-record score of 33.54 penalty points in the opening phase. The Ground Jury, which consisted of the same judges as the Ground Jury at the upcoming FEI World Championships in Riesenbeck next month, unanimously put Weber in first place. Weber, who is known as ‘Mr Dressage’ at the moment, was very pleased with his team of horses, two of which are owned by Jane Clark. Weber also posted the winning dressage scores at the CAI-As in Live Oak (39.42) Lähden (36.35) and Altenfelden (36.86) this season.

While Weber performed at his very best, his main opponents Boyd Exell and IJsbrand Chardon (NED) let themselves down in the individual dressage test. Chardon used his World Championship quartet of horses for the first time this season. With this team, Chardon aims to set a good dressage score and minimise the gap between himself and his opponents in dressage and then drive a very fast marathon. But the strategy did not work in either phase in Aachen. His dressage score was 42.24, which put in him in second position, but too far behind Weber. In the marathon the four-time World Champion drove a wrong gate, which cost him 20 penalty points.

Boyd Exell’s horses needed more preparation than he gave them, which resulted in fourth place in dressage, scoring 44.93, to leave him just behind Dutchman Theo Timmerman.

Gavin and Georg top in cones

The cones competition counting for the individual standings became a duel between Australia’s Gavin Robson and Germany’s Georg von Stein. Both drivers drove a double clear round and crossed the finish line in exactly the same time of 193.81. Individual driver Daniel Schneiders from Germany came third, ahead of Dutch team member Koos de Ronde. Leader in the standings Chester Weber could afford a knock down and firmly kept his lead after dressage and cones. German Champion Christoph Sandmann moved up to the second place in the standings.

The marathon was the third and last phase for the individual rankings and the second competition for the teams. With the best ranked drivers starting last, the tension grew as the marathon approached its end in front of tens of thousands of spectators, who enjoyed the sun and the performances of the 24 top drivers. IJsbrand Chardon lost his chances to close the gap with Weber in the second obstacle, where he took a wrong gate for those costly 20 penalty points. This same obstacle also turned out to be unlucky for dressage winner Weber. His left leader jumped over the trace and his groom had to get down to sort it out. The same situation occurred in the fourth obstacle and by then Weber had lost all his chances of winning Aachen 2012.

Boyd Exell set very fast times in the obstacles and won the marathon, ahead of the German team members Michael Brauchle and Georg von Stein. Koos de Ronde finished fourth in the marathon to secure second place in the final individual results behind Boyd Exell. German team driver Christoph Sandmann celebrated his final edition of the Aachen CHIO with third place. Sandmann will retire as an active driver at the end of this season.

Aachen served as a trial for a brand new system. All competitors got a GPS tracker on their marathon carriage, which meant their exact route and location could be determined. The system is copied from sailing and was used for the first time in driving at Aachen. The system served purely as test; neither the judges nor the competitors used the data, which has been saved and will be used for further development of the system.

O-course designer Dr Wolfgang Asendorf had designed eight challenging obstacles for the 24 drivers, including several mobile obstacles again. These obstacles were made quite flexible to ensure protection of the horses if mistakes were made. But these flexible obstacles caused much commotion amongst the drivers beforehand and they proved to be right afterwards. When a horse or a carriage hit a flexible obstacle, it was squashed together like a harmonica, causing a potentially tricky situation for the next through the gate. Asendorf admitted that the current system was not quite 100 percent, but promised to make the necessary improvements for 2013.

The Dutch team, existing of IJsbrand Chardon, Koos de Ronde and Theo Timmerman, remained unbeatable throughout the competition. The German team of Michael Brauchle, Christoph Sandmann and Georg von Stein finished as runners-up, while the Swedish team of Tomas Eriksson, Axel Olin and Fredrik Persson won the bronze. Dutch coach Harry de Ruyter was proud of his men, winning the gold medal in Aachen for the sixth consecutive time: “Our drivers all have the same focus. They are also very good all-round drivers, while some other nations teams tend to have discipline specialists and I believe this contributes to the success of our team. “ “Never change a winning team” was De Ruyters tactical answer to the question whether these three drivers would also represent The Netherlands at the World Championships in Riesenbeck.

Boyd Exell (AUS): “The owner of my horses, Tamas Vincze, wanted us to bring the Kentucky team to Aachen. They have taken a while to settle. After my disappointing dressage test on the first day, I was pleased with my second dressage test. In the marathon I used a new leader, Monty. It was only his second international marathon, but he turned out to be very fast. My wheeler horses were brilliant so I am very pleased.”

Koos de Ronde (NED): “I had to compete in Aachen without my leader horse in marathon and cones, Diplomat, who was declared not fit to compete at the first horse inspection. I am very pleased with my results, especially because I had to make some changes and put horses in positions where they had never been before. This gave me great confidence also looking ahead to Riesenbeck. And coming second in Aachen behind Boyd Exell is not something to be ashamed of!”

Christoph Sandmann (GER): “After the marathon I was not quite pleased, the fine-tuning between my horses lacked a bit, as they have not been forming a team for long. This was only the second competition for these horses in this formation, but I feel that I am on the right way with this team.”