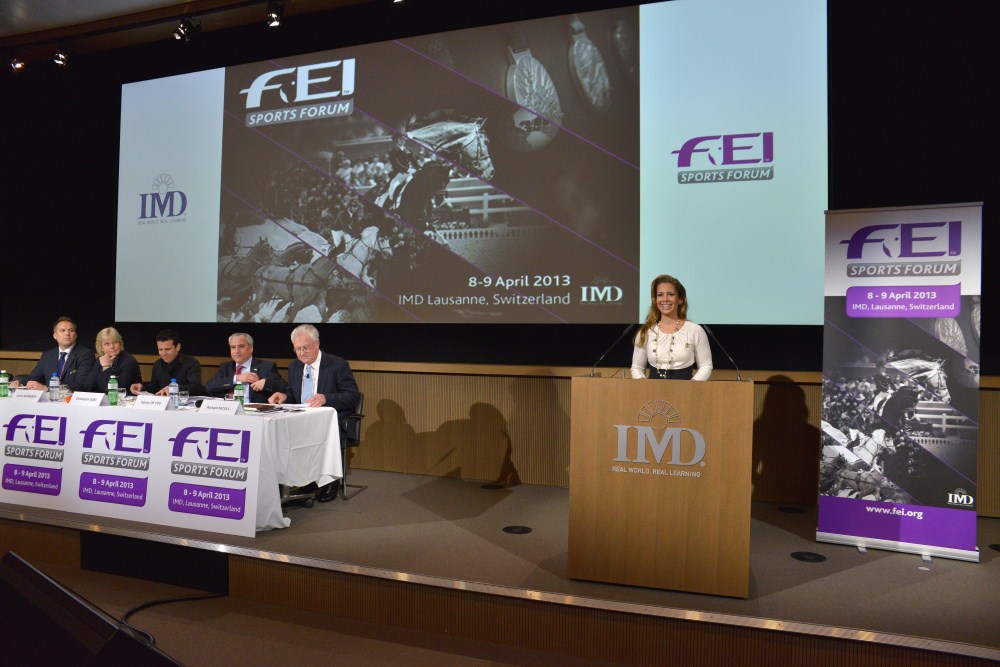 Addressing the delegates, the FEI President commented on the broad cross-section of representatives from the equestrian community attending the Forum, which included the International Olympic Committee (IOC), National Federations, riders and trainers clubs, event organisers, sponsors, welfare organisations and media. “This diversity means that we will all benefit from different viewpoints and insights during our discussions over the next two days and that is exactly what we sought to achieve when we created the FEI Sports Forum,” Princess Haya said.

Following the opening address by the FEI President, the first session of the Forum was devoted to Olympic and Paralympic Games, with National Federations and stakeholders invited to review and participate in open discussions on the quota shift and qualification system for the three Olympic equestrian disciplines – Jumping, Dressage and Eventing – and for Paralympic Dressage for the 2016 Rio Games, as well as harmonisation of the rules across the three Olympic disciplines.

FEI Secretary General, Ingmar De Vos opened the session with a debrief on the London 2012 Olympic Games. He spoke of the importance of having equestrian sport back at the heart of the Olympics, complimenting LOCOG on the success of the Games and highlighting the close team work between LOCOG and the FEI. The Secretary General commented on the new global dimension of the first truly social media Games. And a completely clean Games was the best possible endorsement of the FEI’s Clean Sport Campaign, he said.

The FEI, together with LOCOG and the IOC, has conducted an extensive post-Games internal debrief, which will be shared with future organisers, and the Federation is now in the final phase of appointing a Games coordinator, who will work on future Olympic and Paralympic Games, as well as FEI World Equestrian Games™ and major championships.

Christophe Dubi, IOC Sports Director and Deputy Olympic Games Executive Director, also spoke about the success of London 2012, from a media and television perspective and for producing the best spectator figures ever achieved, with ticket sales at 97% overall and more than 99% for the equestrian events at Greenwich. He was full of praise for the passionate and unified equestrian community, and confirmed that equestrian is part of the 25 sports recommended by the IOC Executive Board to be included on the core programme for 2020 that will be voted en bloc at the IOC Session in Buenos Aires (ARG) next September. He also spoke about the importance of harmonisation across the disciplines to make equestrian sport more readily understood.

“Harmonisation is very important from an IOC perspective and for the general public,” he said. “You need to make that effort to make your sport easier to understand. You have to think about how to present your sport in the best way. Sport presentation has become a key asset, and the branding of your competition is as important as the sports presentation. That may be seen as a revolution inside the sport, but from the outside it’s seen as evolution, and it’s central to the development of the sport,” he said.

The importance of reaching agreement on the proposed changes to the quota system and the qualification structure for the Rio 2016 Games was emphasised by the FEI Secretary General. The final decision on both these issues rests with the IOC.

“We have a very clear message from the IOC that no increase on the overall quota for equestrian sport of 200 athletes will be accepted,” De Vos said. “These are the parameters and we need to find the best balance between universality and performance and to give equal chances to all regions. There is no perfect solution, but it is important to have consensus within our community. The credibility of that community and of our sport depends on our ability to put aside national interests and stand together behind a unified proposal for the IOC.”

To ensure that the same number of nations can qualify for the 2016 Olympic Games, it is proposed that all three Olympic disciplines should be aligned, so that teams in each discipline would include a maximum of four riders with the three best scores to count. This would mean a reduction from five riders to four in Eventing; and an increase from three riders to four in Dressage, and allow for the introduction of one reserve horse per team for Eventing to bring it into line with the other two disciplines.

Under the proposed quota shift, Jumping remains at 75 starters, while Eventing drops to 65 (from 75 in 2012) to allow Dressage numbers to increase to 60 (from 50). It was highlighted that the simulation of the new quota distribution for Eventing, based on the 2012 Olympic Games figures, would not have altered the number of qualified nations. The British National Federation expressed its concern about the reduction of team members for Eventing, but understood why the proposal had been made.

Consensus on the quota shift was reached and will now be brought to the IOC. There is more time to finalise the proposal for specific qualification systems before it is submitted to the FEI General Assembly in November, and stakeholders were urged to continue the debate on the dedicated Online Platform.

There were a number of requests from delegates for the quota to be increased, and Christophe Dubi said that every International Federation is seeking an increase. “Let’s be very clear here, the quotas were set in 1996 and have remained roughly the same, and will remain the same,” he said. “The essence of every IF is to grow their sport, but if you added 20 more riders, or there were more athletes in other sports, what’s the added value for the Olympic Games? It’s the same for every sport and the answer from a purely objective standpoint is that it wouldn’t make a difference. It comes down to the balance between universality and performance. The Games represent the pinnacle and the 200 you have represent your sport best on a worldwide basis.”

The FEI Secretary General then opened discussion on qualification criteria for the 2016 Paralympics, the final topic of the opening session, starting with an evaluation of the London 2012 Paralympic Games, including highlighting record ticket sales and the huge media interest generated by the Para-Dressage events at Greenwich Park. The rapid development of the sport has meant that some changes to the format are necessary, and FEI Dressage and Para-Dressage Director Trond Asmyr spoke on the proposals, which include the reduction of maximum participants from one country from five to four and the necessity to include at least one rider from Grade III or IV in the team.

Both the FEI Secretary General and session moderator Richard Nicoll again highlighted the FEI Sports Forum Online Platform and invited delegates and other stakeholders to continue the discussion online on www.fei.org.