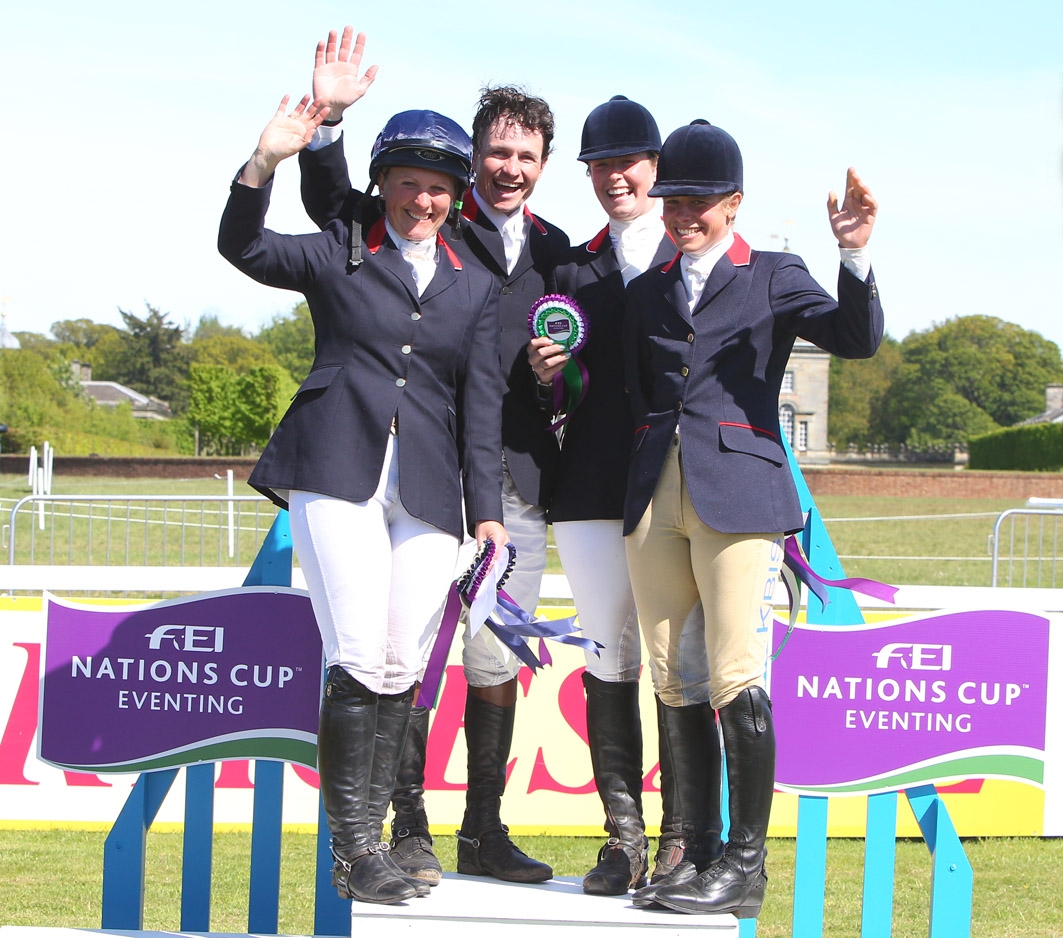 May 28, 2013: The British team repeated their achievement of 12 months ago when winning their home leg of the FEI Nations Cup™ Eventing in the beautiful historic surrounds of Houghton Hall in Norfolk (GBR). As a result, Great Britain has pulled up from fifth to second place in the FEI Nations Cup™ Eventing leaderboard, behind Germany, who won the opening leg at Fontainebleau (FRA) in March.

Germany was in command after the Dressage phase, with three excellent tests, including the leading score of 37.4 from Olympic gold medallist Ingrid Klimke, who eventually finished in individual first place in the CIC3* on her rising star, Tabasco TSF.

Klimke was supported by a great performance from Bettina Hoy, now recovered from her bruising fall at Badminton, who was placed third individually on Lanfranco TSF. But the Germans lost their grip on the top team spot when Julia Krajewski had an unfortunate Jumping round on Lost Prophecy for 20 penalties and her score had to count after Benjamin Winter withdrew Wild Thing Z before the final Cross Country phase.

Gemma Tattersall was the heroine of the home side. Last to go of the British quartet, she knew she had to complete a fast clear Cross Country for her team to win and this she achieved, finishing exactly on the optimum time to take individual second place on Chico Bella P between the two experienced German riders.

Britain’s team manager Philip Surl commented: “We had mixed up the order from Fontainebleau and put Gemma last because the others had multiple rides. So when she set out she knew she had to make the time, and she did the job perfectly.”

Britain has designated a pool of up-and-coming riders who have not yet been to a senior championship to compete in the FEI Nations Cup™ Eventing. “The series is fantastic from the point of view of gaining experience,” Surl added.

“The team came to Houghton on the back of what was considered a not very good result at Fontainebleau, and were under pressure to defend their title. They are four good combinations, and performed well. A lot can happen in the next month and there are plenty of opportunities for riders to prove themselves before the Europeans.”

Although the Jumping and Cross Country phases took place in sunshine, Houghton had endured quite a bit of rain beforehand. This meant that the footing on Alec Lochore’s (GBR) course was holding, and this had an influence on the time.

“It’s a beautiful park with big open spaces so the horses can see the fences,” commented Ingrid Klimke. “I’m very happy that Christopher Bartle [German team trainer] told me to come over here. The course was very fair and encouraging for my horse, and he was still galloping well at the end.”

Klimke said of Tabasco TSF: “He’s wonderful. We received some offers for him at 2* level and considered selling him to a Junior rider, but I have decided to give him one more year to prove himself at 3* level. Now he has to prove himself at Luhmühlen CCI4* next month.”

The third-placed Australian team included Lucinda Fredericks, who was competing in her first international event since breaking her collarbone in a fall in March. She produced a good Dressage score of 41.3 on her Olympic horse Flying Finish, had a clear Jumping round and then took it steadily across country for 13.6 time penalties.

Fellow Australian team member Kevin McNab, who finished 10th and best of his team on Clifton Pinot, commented: “I think this is a great series for getting riders and officials to work as a team, for encouraging team spirit and for raising the bar within a nation. It’s good to see how other countries, and their support teams, work, and learn why they are so successful at the major events.”

The New Zealand team, led by fourth-placed Lucy Jackson on Willy Do, slipped a place to fourth when they had to count Tim Rushbridge’s low Dressage score after Clarke Johnstone retired Regal Romar across country.

Two French riders were eliminated across country, but France is still third on the FEI Nations Cup™ Eventing rankings thanks to a second place at Fontainebleau.

The Dutch team withdrew after suffering the tragic loss of Raf Kooreman’s horse, Cavalor Telstar, which collapsed and died after going clear across country.

The third leg of the FEI Nations Cup™ Eventing takes place at Strzegom (POL) from 30 May to 2 June. —- By Kate Green/Picture: FEI/Fiona Scott-Maxwell