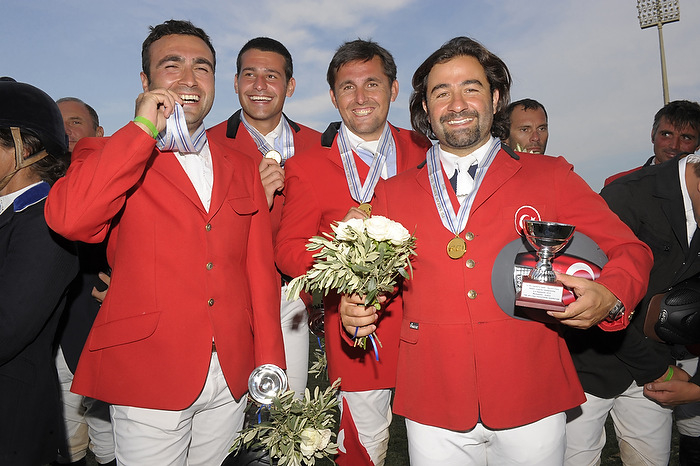 Athens – Sept 11, 2012: Greek riders proved a formidable force at the FEI Balkan Jumping Championships when claiming three individual and three team titles on their home turf in Athens over the weekend. The 2012 fixture took place at the Markopoulo Olympic Equestrian Centre, venue for the equestrian event of the 2004 Olympic Games, and 170 riders from eight countries lined out for the event.

The Hellenic Secretary General of Sports, Mrs Kyriki Giannakidou and First Vice-President of the Hellenic Federation Mr George Lenos attended the Opening Ceremony at which the Hellenic Navy Band led the parade of nations. With five sets of team medals and five individual titles up for grabs it was a busy schedule over the four-day fixture.

There were four nations in contention in the Children’s team competition in which the fences stood at 1.10 metres. And when Leonida Palegdas (Cenlata) and Stefania Cheinoporos (Championess) jumped double-clear, then only one of the four faults collected in each round by Dimitra Antypa (Varien) and Alexandros Kokkonis (Oleis de Chenee) had to be taken into account to give them a final total of eight.

“I am the only rider of our team that didn’t compete at the European Championships in Austria”, Antypa pointed out after the medal ceremony. “I am very proud of myself as it is my first gold medal in the Balkan Championships ever!”, she said. Her 14 year old team-mate Alexandros Kokkonis added, “it was good today, the course was not very high but had some difficulties”.

The silver medallists from Romania finished a close second when completing on a final score of 12. Marco-Alessandro Alfieri (Pauline) produced a double-clear and was joined by Irina Mateescu (Patima), Ana Maria Mialtu (Wojan) and Teodora Ioana Rus (Afrodita Z) on the second step of the podium.

It came down to a two-way jump-off between Turkey and Greece for bronze. But when they could still not be separated by penalties, they shared the honours in the final analysis as time is not taken into account at this level in these Championships.

Romania’s Alfieri took the Individual Children’s title in convincing style when completing on a zero score to pin Bulgaria’s Daloyan Dodrev (Kaskada) into silver medal spot ahead of team gold medallist Cheinoporos from Greece. “I am very happy with the gold medal and my general performance in this year’s Balkan Championships. This is my first participation in the Championship and I am riding for just two and a half years”, said the Romanian champion.

The Greeks proved untouchable at Young Rider level, claiming the Team title by a significant margin and filling all three steps of the individual medal podium.

Efthimios Kremotis (Primeur), Monika Martini (Cleopatra), Georgia Founta (Claudia) and Emmano Errera-Fotiou (Cassandra) completed the team event with just 10 faults on the board, and this gave them a 31-fault advantage over their nearest rivals from Turkey – both Founta and Martini leaving all the poles intact throughout the day.

However just three nations competed for the Young Rider Team medals and both the silver medal side from Turkey and the bronze medallists from Romania fielded only three riders.

The Greeks had a real stranglehold on the Individual leaderboard when filling the top five places headed up by Founta in gold medal spot, Martini who took silver and Papageorgiou who claimed the bronze.

The fences for the Amazons, or Ladies, Championship were pitched at 1.30m and just three countries fielded teams for this one in which Turkey reigned supreme.

It was a close-fought battle for team gold and silver, with the Greeks looking very strong after the first round with just four faults on the board after clears from both Karina Kypreou (Quezac D’Esquelmes) and Eleni Thomaidou (Comeet) and just one of the four-fault results from Elina Dendrinou (Odeon D’Elle) and Milena-Maria Pappa (Chelsea) to be taken into account.

The Greeks had a fence in hand as round two began, but despite a second clear from Kypriou, single errors from the remaining team members meant the host side had to settle for silver as Turkey’s Berma Kok (Vienna SP), Aylin Yildiz (Harras) and Talya Afyonery (Florentine) all kept a clean sheet this time out to add nothing to their scoreline.

The Bulgarian team finished well behind when taking bronze with a total of 60 faults despite a second-round clear from Stefka Sivriiska (Stritzel).

The single mistake in the opening round of the nations cup was the only error of the weekend for Turkey’s Afyonery (Florentine) who went on to take the individual title ahead of Pappa (Chelsea) and Thomaidou (Comeet) from Greece who clinched silver and bronze. “This is my first big achievement, and of course my first title in the Balkan Championships. I trained really hard to come to Athens and my goal was first place. The courses were super and the atmosphere in Athens is fantastic!” said the newly-crowned champion from Turkey.

The Greeks were back on top again in the Junior division however with a convincing win in the team championship before also claiming individual gold and silver.

With just 12 faults on the board, Ioli Mytilineos (Ascot), Stefanos Papageorgiou (Vahron), Anna Maria Papageorgiou (Verona) and Marina Theophanopoulou (Oscar du Peron) easily claimed the team title when Turkey slotted into silver medal spot with 34 faults. The Greek result was boosted by good double-clear rounds from both Mytilineos and Stefanos Papageoriou. The Romanian bronze medallists were close behind when collecting 37 faults at the end of the day.

Greek team leader, Dimitris Kremiotis, described his side as “fantastic!”. He explained “I am very happy for the Juniors today. The truth is that some of them had a very good preparation this year after participating in the European Junior Championship held in August in Austria. For them, 1.25m is easy now” he pointed out.

So it was no surprise when Mytilinaiou (Ascot) took individual gold ahead of fellow-Greek Stefanos Papageorgiou in silver while Turkey’s Buse Samli (Matcho) took the bronze.

The Turkish team of Cagri Basel (Candid), Hasan Senturk (Unicums Jumpy), Sencer Horasan (Quick de St Hermelle) and Husnu Dinc (Chiara) were clear winners of the Senior title when completing with just eight faults. The fences stood at 1.40m in this competition and only Turkey’s Dinc and Chiara managed to jump clear in both rounds.

Well-known French course designer and trainer, Frederic Cottier, led the Turkish side to success for the last time, as he is now taking up the role of course designer for the Alltech FEI World Equestrian Games which will take place in Normandy, France in 2014. He described the Senior team competition track as “possible for everyone today”.

He explained “this is the last year I am helping Turkey after a successful collaboration for four years, since I am the designer for the 2014 World Equestrian Games and I cannot do both (jobs). I am very pleased with both our teams, Juniors and Seniors, who won the gold. They rode very well today. Our Juniors, Children and Young Rider teams are different to those who competed in Austria for the European Championships last month, and this gives motivation to every rider” he added.

Turkey had to settle for the bronze medal in the Individual Senior Championship however when Greek team gold medallist Alexandros Fourlis clinched the gold by a narrow margin ahead of Serbia’s Drasco Dokic riding L’Avian, while Turkey’s Sencer Horasan (Quick de St Hermelle) was next in line.

The event concluded with a closing ceremony and the delivery of the Balkan flag to Turkey as organisers of the next Balkan Championship. Greece topped the medal table at the end of the exciting fixture with 14 in total – six gold, five silver and three bronze. Turkey was second with eight – three gold, two silver and three bronze.