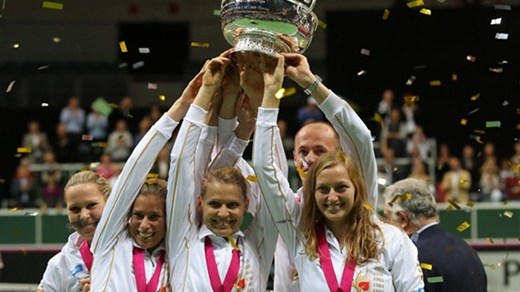 PRAGUE, CZECH REPUBLIC: Lucie Safarova led her team to victory on the second day of the Fed Cup by BNP Paribas Final after defeating Jelena Jankovic 61 61 in front of a full house at the O2 Arena.

In the first rubber of the day Kvitova was outgunned by an inspired Ana Ivanovic to give the visitors a glimmer of hope but Safarova carried her good form from yesterday into the fourth rubber to ensure the Czechs won their seventh Fed Cup title overall.

The victory moves the Eastern European nation into joint-second alongside Australia for the most Fed Cup titles and cements their place as the No. 1 team in the competition having also won the title in 2011.

“Here at home in this type of crowd, it’s indescribable, it’s an amazing feeling,” said Safarova, who clinched the decisive point in a Fed Cup tie for the first time in her career by playing out of her skin against Jankovic.

“There are so many emotions and happiness and that is the feeling we are practicing for every day, even if you’re not in the mood to work,” she added.

Captain Petr Pala, who collected the trophy from ITF President Francesco Ricci Bitti spoke to the crowd after the match and thanked the Serbian team and wished them well for the future.

Pala made special mention of the home fans, who have cheered every point and made this final one to remember. “It’s phenomenal,” he said. “The crowd is amazing, they deserve it too.”

For the Serbians it was a difficult day at the office. Ivanovic gave her team hope of an unlikely comeback after playing unbelievably well against Kvitova to win 63 75 in one hour 47 minutes – the longest match of the weekend.

“To give a whole point to our team was just amazing,” she said. “It was a really good quality match. “I knew I was going to play better today because I got that experience yesterday.”

For Kvitova it was a step too far on her return from illness. “I didn’t have a lot of energy and it was obvious on the court. I tried to play only for a few shots, I couldn’t play for longer, and that’s why I started to have mistakes.”

And any hope of taking the tie into a decisive fifth rubber was extinguished by Lucie Safarova, who from the outset dominated Jankovic with cleanly struck groundstrokes.

Safarova celebrated by performing an impromptu rendition of a dance that went viral on the internet with Andrea Hlavackova earlier this week. The pair had obviously choreographed a victory jig to Carly Rae Jepsen’s Call Me Maybe and they brought the house down with their on-court shenanigans.

Prague will be a party town tonight and the fans will be hoping for more of the same in two weeks’ time when the Czech men take on Spain at the same venue in the Davis Cup by BNP Paribas Final.

For now we can reflect on the wonderful culmination to another fine year of Fed Cup action and look forward to seeing you in 2013. —- ITF