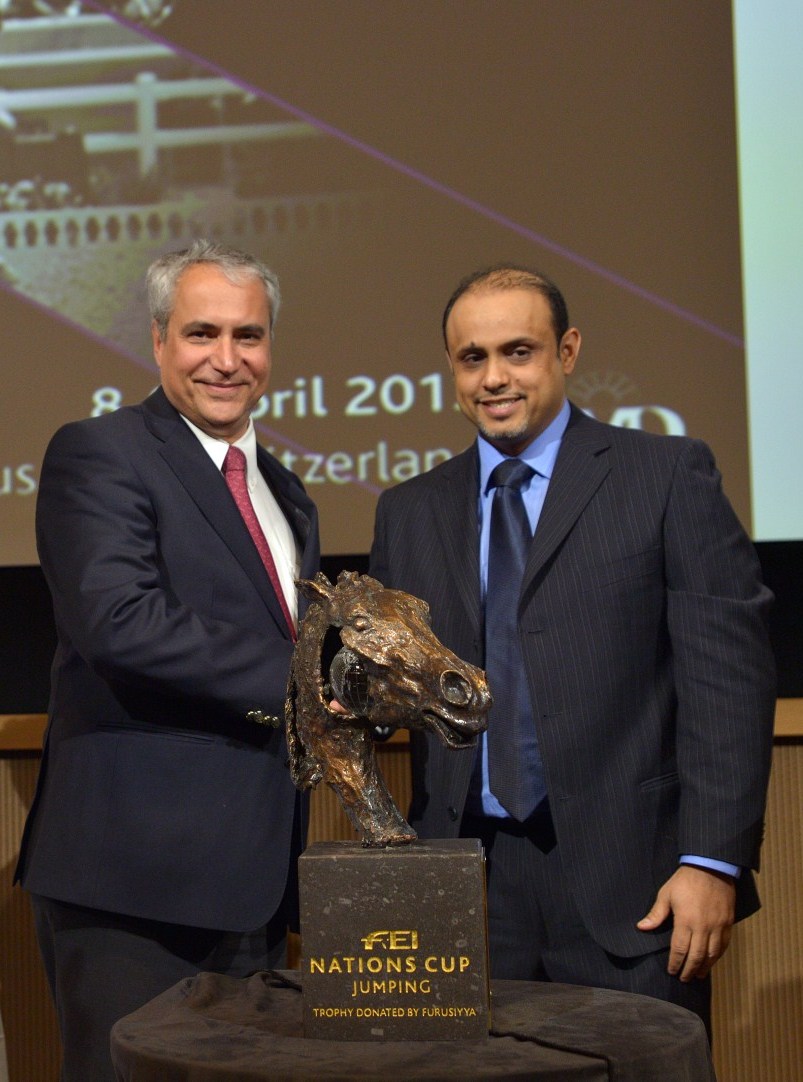 Lausanne, April 09, 2013: The fabulous new trophy that will be presented annually to the winning team at the Furusiyya FEI Nations Cup™ Jumping Final was unveiled by the series sponsors, Saudi Equestrian Fund, at the FEI Sports Forum in Lausanne (SUI) today.

The perpetual trophy, which will first be awarded at the 2013 series Final in Barcelona (ESP) at the end of September, was formally presented to FEI Secretary General Ingmar De Vos and Chair of the FEI Jumping Committee John Madden by Saudi Equestrian Team Director Sami Al Duhami at the start of today’s Jumping Round Table session at the Sports Forum.

“We wanted to create a trophy that would be as stylish as the new format for the Nations Cup series, and we believe that’s exactly what we’ve got,” Sami Al Duhami said. “It’s a great honour for me to present this beautiful trophy officially to the FEI today on behalf of the Saudi Equestrian Fund/Furusiyya and we very much look forward to seeing the winning team receiving it in Barcelona in September.”

The imposing trophy, which stands 50cms high and weighs close to 18 kilos, has been crafted in bronze, crystal and limestone and features a horse’s head surrounding the globe. Inspiration for the design came jointly from FEI President HRH Princess Haya and HH Prince Faisal, and expresses the connection between the free spirit of the horse and the global nature of the Nations Cup series.

The new trophy is a celebration of the rejuvenated format that was introduced this season to mark the four-year, €16m sponsorship package from Furusiyya, making the historic Nations Cup series modern, universal and more readily understood. The trophy was created by Irish designer Ian Calder in Newcastle, Co Wicklow.

The FEI President expressed her delight at the finished design. “Ian Calder has done a wonderful job and has created a beautiful piece of art,” Princess Haya said. “There are so many symbolic elements to it, and it captures the feeling that it‘s not just that the horse belongs to the world, but that the world belongs to the horse.”

“It is fitting that a series with such an incredible history should have an iconic trophy for the winners, and there is no doubt that there will be fierce competition amongst all the teams this year to be the first country to have their names inscribed on this fabulous trophy, reflecting the truly global dimension of the Furusiyya FEI Nations Cup Jumping series. The FEI Nations Cup goes back over a century, and I’m hoping that this trophy will be the face of the series for the next 100 years.”

“The original inspiration for the design of the trophy came from Princess Haya and Prince Faisal”, said Irish designer Ian Calder. “The brief was to express the spirit of the horse, but also reference the global nature of the Nations Cup series.

“The concept I was given was to create a horse’s head, which we cast in bronze – a craft older than the Pyramids – but I wanted to make it more symbolic, fragmenting the head in places so it would look like an antique artefact dug up somewhere that horses had been bred for thousands of years. Then, in the cavity, I used a lead crystal globe which catches the light. It’s like the pearl in an oyster and I believe it really does capture the essence of international equestrian sport.”

The Real Club de Polo of Barcelona (ESP), venue for the equestrian events at the Barcelona Olympic Games in 1992, will play host to this year’s Furusiyya FEI Nations Cup™ Jumping Final with a €2 million prize fund on offer, the largest ever in Nations Cup history. The 2013 Final will take place from 26 to 29 September.