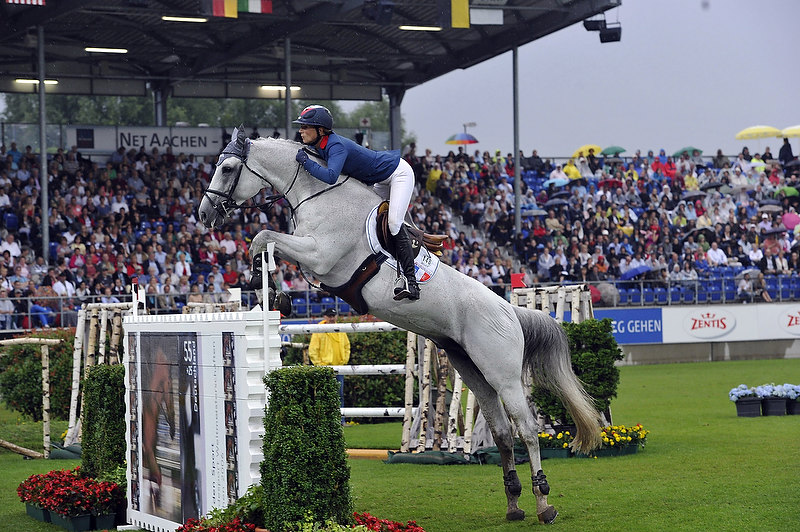 Aachen (GER), July 05, 2012: FABULOUS, In a super-tough clash that tested character to the limit, it was the French who came out on top at the fifth leg of the FEI Nations Cup™ 2012 series at Aachen, Germany tonight.

Henk Nooren’s team displayed grit and determination as they pipped the much-fancied host country whose deep pool of riding talent has been somewhat diminished in recent days. An extraordinarily poor performance from the anchor partnership of Marco Kutscher and the stallion Cornet Obolensky has left even more questions hanging in the air ahead of Germany’s final Olympic selection next Sunday night.

The Irish battled hard to finish a creditable third ahead of Switzerland in fourth and Great Britain in fifth, while the 2011 winners from The Netherlands had to settle for sixth this time around. The Swedish team was reduced to just three after a fall for Peder Fredricson and H&M Arctic Aurora Borealis in the first round, and they slotted into seventh ahead of the Belgians whose big score of 40 faults saw them tail the rest of the field.

It was a long, hard day at the office all round, but when the going got tough, it was the French who proved they had what it takes, and they clinched victory in resolute style. Germany, however, has lost little in defeat as the runner-up result tonight has only served to further strengthen their position at the head of the FEI Nations Cup™ 2012 leaderboard.

Frank Rothenberger’s track was nothing if uncompromising. The massive Aachen arena is a daunting place at the best of times, and under floodlights and with 40,000 spectators watching your every move, the pressure on horse-and-rider is even more intense.

The German course designer’s signature track is always big and bold, and tonight’s was no exception with the 4.3 metre open water claiming a large number of victims, and the difficult final line of fences through a big oxer to flimsy planks and, finally, a double of vertical to oxer, leaving them with plenty of food for thought. Several made it all the way to the very last before faulting there, but it was the triple combination at fence five that reduced the Swedish team to a three-strong side when second-line rider, Peder Fredricson, had a nasty fall with H&M Arctic Aurora Borealis at the final element.

The French already had the advantage at the halfway stage, when carrying just the single time penalty picked up by Roger Yves Bost and Nippon d’Elle after lovely clears from Eugenie Angot (Old Chap Tame) and Penelope Leprevost (Mylord Carthago). Olivier Guillon’s mistake with Lord de Theize at the opening element of the triple combination provided the discount score.

The Germans were close behind with just four faults on the board after fault-free efforts from Marcus Ehning (Plot Blue) and Christian Ahlmann (Codex One), and a single error from Janne-Friederike Meyer (Cellagon Lambrasco). The shock of the first round was the 16-fault result for Kutscher whose stallion lost concentration after a mistake at the water and who then went into backward-thinking mode all the way to the last.

The Dutch were still competitive with just eight faults at the halfway point, while Ireland and Sweden were next in line with 12, the Swiss were close behind with 13 while Belgium carried 15 and the British began round two with 17 on the board.

But with 24 additional faults in the second round, the Dutch disappeared from the reckoning, and it came down to a game of cat-and-mouse between the Germans and French.

KEPT THE PRESSURE UP

Germany kept the pressure up when both Ehning and Ahlmann went clear once again, so when Angot and Bost picked up five faults apiece it seemed the French might lose their grip. But Meyer’s double-error – at the bogey water and the second element of the final double – left the host country vulnerable, and when Leprevost produced a second sensational run then France could finish with no less than 11 points in total.

Kutscher could still turn the tide. A clear from his stallion would ensure that Meyer’s 8 faults would not be added to Germany’s first-round four, and even a single mistake would leave the door open. But Cornet Obolensky was right off form, kicking out the opening vertical, putting a foot in the water and lowering the oxer three from home along with the second element of the final double for another 16 faults. French anchorman, Guillon, was only jumping for a qualifying spot for Sunday’s Grand Prix when returning his four-fault result which reduced the final French tally to 10, while Germany had to accept second spot with a total of 12 faults.

The Irish battled their way into third thanks to gutsy second-round clears from Billy Twomey (Je T’Aime Flamenco) and Cian O’Connor (Blue Loyd), and the fourth-placed Swiss were greatly assisted by another remarkable double-clear from Paul Estermann and the 10 year old mare Castlefield Eclipse who has now competed in three legs of the FEI Nations Cup™ 2012 series without fault.

The Irish however continue to languish at the bottom of the league table, on an equal score of 18 with the Swedes who, however, lie one place above them due to higher placings so far in the tournament. Irish Chef d’Equipe, Robert Splaine, said his team came into today’s competition with all guns blazing. “We aspired to win, so we won’t be ecstatic with third, but I’m really pleased with the attitude we showed – we fought to the finish” he said.

Looking back on the competition afterwards, German team manager, Heinrich-Hermann Engemann said “we made a very good start with two clears and a four, but then Marco’s horse was not in the same form as he was two weeks ago in Rotterdam. In the second round we had two clears, but Janne had a bit too much power, so we hoped that Marco would bring us back a little bit. It wasn’t a good day for Marco, and it was unlucky for the team” he pointed out. He wasn’t altogether despairing however, because apparently the statistics may be on Germany’s side. “We have been second here every year before the Championships – second before Kentucky (Alltech FEI World Equestrian Games™ 2010) and Madrid (FEI European Jumping Championships 2011) – so second before the Olympic Games is lucky for us then!” he insisted.

Last-line Frenchman, Olivier Guillon, explained that Eugenie Angot got a late call-up “because Patrice Delaveau should have started” and that it was Eugenie’s brilliant opening clear “that gave us really good motivation”. Angot said “I only knew definitely this morning that I’d be jumping in the Nations Cup. My horse went well yesterday, so I was confident about today”.

And French Chef d’Equipe, Henk Nooren, was well-pleased with the performance of his talented side which, up until now, has failed to live up to expectations. “To win a Nations Cup in Europe is wonderful, but to win in Aachen for all of us is the best – the stadium, the atmosphere, it is completely unique!” he said. “We wanted to do the season a bit different from normal” he continued. “In 2009 we showed form much too early, so this time we deliberately wanted to be better by the time we arrived in Rotterdam and Aachen. We didn’t plan to have a disastrous Nations Cup as we had at the beginning of the year! We found ourselves having to use our reserve horse always, never the exact team we wanted, there we always hiccups here and there. Thank god it started to go our way in Rotterdam and I hope we can keep it going for a few more weeks as there is something important coming up!” he concluded.

That “something important” is, of course the London Olympic Games which are just three weeks away now. Two more legs of the FEI Nations Cup™ series will take place before then – Falsterbo, Sweden plays host next Friday and, a week later, the series moves to Hickstead, Great Britain. The last leg will take place in Dublin, Ireland a week after the Olympics draw to a close. The destiny of the FEI Nations Cup™ 2012 trophy is still far from decided.

1 Elimination in first round – Peder Fredricson and H&M Arctic Aurora Borealis who fell at the third element of the triple combination at fence five.

8 horses faulted at the 4.3 metre-wide open water in the first round, including the three other members of the Swedish team who scores counted.

The oldest was Lantinus, the 14 year old gelding partnered by Ireland’s Denis Lynch.

The open water was hugely influential throughout the competition as was the triple combination at fence five, the oxer at fence 10 and the final double at fence 12. —- by Louise Parkes FEI. Photo: FEI/Kit Houghton.