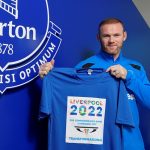 Rooney, born and bred in the Liverpool suburb of Croxteth, has thrown his weight behind the bid which promises to transform the city and accelerate up to £1bn of investment in the docklands area.

Central to the Games vision is a brand new stadium for Rooney’s current club Everton in Bramley Moore Dock, which will provide a stunning setting for the Commonwealth athletics as well as an intimate, atmospheric Premier League arena.

The news of Rooney’s support follows just days after Liverpool FC legend and Rooney’s former England teammate Steven Gerrard gave his backing to the bid, alongside both Jamie Carragher and Robbie Fowler.

Both of the city’s world famous clubs have come together in support for the bid and go to prove Liverpool’s united appetite for the Games in 2022.

Discussing the bid, Wayne Rooney said:
“I’m proud to be in a position to back our city’s bid to host the Commonwealth Games in 2022 and I have no doubt that Liverpool would be the perfect host city.

“People’s passion for football within the city is recognised around the world but we also have a rich sporting tradition in the boxing ring, on our golf courses which have staged Open Championships, in athletics and gymnastics and, of course, Liverpool stages the jewel in the crown of National Hunt horseracing every year at Aintree, the Grand National.

“Bringing the Commonwealth Games to the city would be fantastic and fitting, showcasing again to the world what a great city Liverpool is and I support the bid wholeheartedly.”

Liverpool 2022 bid chair, Brian Barwick, added:
“I am really delighted Wayne has shown his support for the Liverpool Bid for the 2022 Commonwealth Games.

As a world-famous record-breaking footballer Wayne has proved to be a winner throughout his career and as a true Scouser his endorsement for the Bid is very special.

“Everton Football Club’s support for the Bid has been simply outstanding, their commitment fantastic – yet another world-famous Merseyside sporting institution getting behind the Liverpool 2022 Commonwealth Games Bid.”

“The opportunity for Everton’s new home to play a key role in the Commonwealth Games is a very exciting one for our city and the Club, presenting a unique platform to showcase our sporting pedigree, our waterfront and all our city has to offer to audiences across the world.

“We’re delighted to have the support of everyone at Everton. Having players like Wayne back our bid means a great deal and underlines how much everyone is determined for Liverpool to be chosen as England’s host city.” http://www.liverpoolcg22.org/