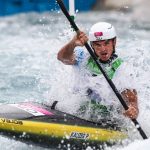 The venue, which is famous by its drop, has already hosted Canoe Slalom European Championships in 2005, in addition to three World Championships and numerous World Cup events. Even though 12 years have passed since then, there are some familiar faces from 2005 also entered in the competition this year.

Despite April’s floods that caused many concerns among the organisers of the event, the venue is ready for the beginning of the championships.
“We are planning a big sporting event,” event organiser, Jakob Marusic, said.

“The course is well prepared and is waiting for the best European paddlers. We dedicated Thursday and Friday to children from elementary schools and younger, we prepared a special programme for them.

“We expect the most visitors on Saturday and Sunday for the semi-finals and finals. The preparations of the championships are going well.

“There are some difficulties, but we are probably world champions in preparing the race with the smallest budget and the fewest number of people involved in the organisation. I think everything will be well prepared and will be on the highest level.”

You can find all the event details on the competition website. —- ICF