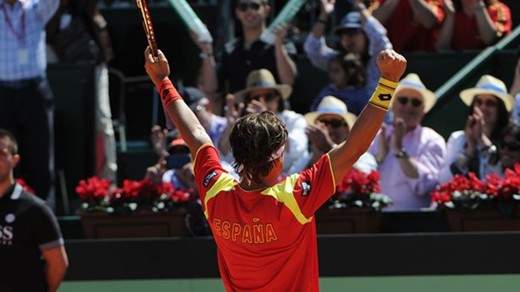 With every Davis Cup by BNP Paribas World Group quarterfinal still live going into the final day for the first time since 2005, there was palpable excitement surrounding the final day with fans flocking to the grounds, excited at the prospect of upsets and more breathtaking tennis (dramatic close).

Probably the biggest upset of the day came at Roquebrune where French No. 1 Jo-Wilfried Tsonga was powerless to resist big-hitting John Isner as the American claimed victory in four sets to put USA through to the semifinals for the first time since 2008. Isner was in fine form and thoroughly deserved his 63 76(4) 57 63 victory. It was a serving masterclass from Isner as he smashed down 16 aces and lost his service only once, in the third set.

In the final ‘dead’ rubber, Gilles Simon comfortably saw off Ryan Harrison 62 63 to have the scores end at 3-2 in favour of USA. Many people would have written the Americans off before the start of this tie, especially with it being played on clay, but, just as they did in the first round, they proved the nay-sayers wrong and produced several fine performances.

Jim Courier’s men advance to the semifinals where they will meet Spain in a rematch of last year’s quarterfinal, though this time it will be in Spain. Team USA can expect to find themselves on clay once again as it is widely known to be the Spanish team’s surface of choice, hardly surprising given that they are unbeaten on it since 1999, but the American team, led by Isner, will have less of a reason to be fazed after this performance.

Spain booked their place in the final four with a clinical 4-1 victory over Austria. World No. 5 David Ferrer proved to be too strong for Jurgen Melzer as the Spaniard emerged victorious in straight sets. No one had fancied the Austrians prior to the tie and it seemed they were in for a whitewash after the opening day of rubbers. However, an impressive fight back in the doubles on Saturday had restored some hope and you could see the belief in Melzer throughout the match. Unfortunately, belief wasn’t quite enough as Ferrer prevailed 75 63 63.

The fifth rubber saw Nicolas Almagro defeat Alexander Peya 75 75 in a match that never really threatened to raise many eyebrows given that there are almost 700 places between the two players in the world rankings. Nevertheless, the victory ensured Spain’s 4-1 win and set up their clash with USA which will undoubtedly be excitement-filled.

Elsewhere, 2010 winners Serbia were knocked out by Czech Republic when a thrilling encounter between Tomas Berdych and Janko Tipsarevic came to a close, with the Czech No. 1 winning 76(6) 76(6) 76(7) in a match that lasted almost four hours. This was billed to be the clash of the tie and it didn’t disappoint.

Tipsarevic had the better of the first two sets and had the opportunity to serve for both of them, but each time Berdych stormed back, forcing the tiebreak and going on to win it. The Serbian managed to save a match point in the final tiebreak but ultimately was not able to force the tie into the final, deciding rubber.

This was a Serbian team without world No. 1 Novak Djokovic but still with a very strong line-up, against a Czech side full of experience, with Berdych and Stepanek having an impressive 55 wins in 36 ties between them. And, ultimately, it was experience which prevailed with Berdych winning both of his rubbers and the Czech duo winning the doubles. This is the way that most of Czech Republic’s ties have gone over recent years and that could be one of the reasons behind them appearing in their third semifinal in four years.

This will have been an especially pleasing victory as they can consider it revenge for the 3-2 defeat at the hands of Serbia in the 2010 semifinal in Belgrade. The fifth rubber saw Lukas Rosol beat Viktor Troicki in a tightly contested match 76(5) 75 to seal a 4-1 overall victory.

Czech Republic will next face Argentina in the semifinal as they battled past Croatia, with talisman Juan Martin del Potro in fine form. After a crucial win in what can only be described as an epic doubles match, the stage was set for del Potro to carry his nation through to the final four as he took on Marin Cilic.

In what should have been a tightly contested match, del Potro blew the Croatian away, forcing 16 break points and converting eight of them and taking the victory 61 62 61. In Cilic’s defence, he had played over 10 hours of tennis in the past two days after his incredible five-setters against Nalbandian on Friday and again in the doubles on Saturday, whereas del Potro had only played just over two hours after his victory over Ivo Karlovic on Friday. The fifth rubber sees Juan Monaco defeat Antonio Veic 61 61 to leave the final score at 4-1.

Argentina don’t have the best of records against the Czechs but the last time the two played in Argentina, the South Americans won 5-0. They will certainly be hoping for a repeat of that comes September.

Click the links below a full report from each of the World Group quarterfinals.

View all posts by: Abdul Rahim
One Response to “Davis Cup quarters draw to a dramatic close”