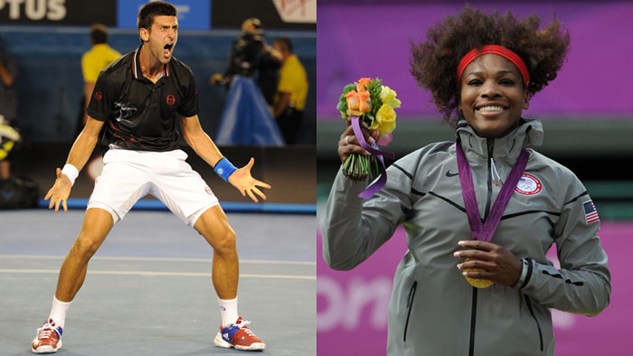 London – GBR, Dec 11: The ITF announced today that Novak Djokovic of Serbia and American Serena Williams are the 2012 ITF World Champions. This is the second successive year Djokovic has received this honour, while Williams is named Women’s World Champion for the third time.

Novak Djokovic finished on top of the rankings and as ITF World Champion for the second straight year. The 25-year-old successfully defended his Australian Open title and went on to reach the finals at Roland Garros and the US Open. Despite losing the No. 1 ranking to Roger Federer in July, he regained the top position in November and went on to win the ATP World Tour Finals. He won a total of six titles in 2012.

Djokovic said: “I am proud to have been named ITF World Champion for the second successive year. It was very difficult to follow up such a successful season in 2011, but it was extremely satisfying to win another Grand Slam title, reach two other major finals and finish the year at No. 1.”

Serena Williams’s superior record in the year’s major events sees her crowned Women’s World Champion ahead of Victoria Azarenka and Maria Sharapova. The 31-year-old captured Olympic singles gold for the first time, and won Wimbledon and the US Open to take her total number of Grand Slam titles to 15. She went on to capture the year-end WTA Championships to finish the season with a tour-best seven titles and a 58-4 win-loss record.

Williams said: “It means a lot to be named ITF World Champion for the third time. It has been such an amazing experience this year to win the Olympics and two Grand Slam tournaments, and I look forward to having an awesome 2013.”

ITF President Francesco Ricci Bitti said: “This has been another memorable year for our sport, highlighted by the most successful Olympic Tennis Event in history. In such a strong era for men’s tennis, it is a great achievement for Novak to retain his year-end No. 1 ranking, while on the women’s side Serena proved herself to be one of the finest competitors of all time.”

Bob and Mike Bryan are named Men’s Doubles World Champions after a year in which they captured their first Olympic gold medal at Wimbledon, having won bronze in Beijing. The brothers equalled the all-time record for Grand Slam doubles titles by capturing their 12th title at the US Open, and were also runners-up at the Australian Open and Roland Garros. They won five more events in 2012 to stand at 82 career titles.

Bob Bryan said: “Mike and I are very grateful for receiving this honour, and we’d like to thank the ITF for this prestigious award. This is one of our achievements that we are most proud of, and we look forward to celebrating it next year in Paris.”

Sara Errani and Roberta Vinci are the first all-Italian pairing to be named Women’s Doubles World Champions. The duo captured their first two Grand Slam titles at Roland Garros and the US Open, and were also runners-up at the Australian Open. They won a tour-high eight titles during the year, including five successive tournament wins between April and June. They ended the year as the No. 1-ranked team.

Errani said: “We have had an amazing year and are proud to be named ITF World Champions. There have been so many highlights in singles and doubles, but we are very happy to be the first Italian pair to finish the season at No. 1. We’re already looking forward to next season.”

The ITF’s selection of its senior World Champions is based on an objective system that considers all results during the year, but gives weight to the Grand Slam tournaments, Olympic Tennis Event and two ITF international team competitions, Davis Cup by BNP Paribas and Fed Cup by BNP Paribas.

Filip Peliwo is only the second Canadian after Daniel Nestor to be named ITF World Champion in any category after securing the year-end No. 1 junior boys ranking. The 18-year-old became the first player since Mark Kratzmann in 1984 to reach all four junior Slam finals in a calendar year. He lost his first two finals at the Australian Open and Roland Garros, before winning Wimbledon and the US Open.

Peliwo said: “This is such a great achievement and a huge honour to be recognised by the ITF for this award. I exceeded even my own expectations this past year and to have the year-end No. 1 ranking is something really special that I am proud of.”

Taylor Townsend is the first American girl since Gretchen Rush in 1982 to be named Junior World Champion. The 16-year-old captured her first major singles title at the Australian Open, and narrowly failed to achieve the Grand Slam in doubles, winning three titles at the Australian Open, Wimbledon and the US Open. She also led her country to victory in the finals of the Junior Fed Cup by BNP Paribas.

Townsend said: “It’s a great honor. I mean, there’s so much that goes into the title World Champion, and I’m honored and blessed that they would even crown me that.”

Stephane Houdet enjoyed a breakthrough year to be named Wheelchair World Champion for the first time at the age of 42. The Frenchman won his first Grand Slam singles title on home soil at Roland Garros to take over the No. 1 ranking, and stayed at the top for the rest of the year. He was also a singles silver medallist at the Paralympic Tennis Event and led France to victory in the BNP Paribas World Team Cup.

Houdet said: “This has been my best year with my first Grand Slam victory in my country in front of my friends and family, two Paralympic medals, and winning the World Team Cup. These are dreams come true, but also give me new dreams to continue along the same path.”

Esther Vergeer extended her winning streak to 470 matches en route to the year-end No. 1 wheelchair tennis ranking for the 13th consecutive year. The 31-year-old became tennis’s most successful Paralympian, winning her fourth successive singles gold in London. She won a total of 10 singles titles during the year, including the Grand Slam events at the Australian Open and Roland Garros.

Vergeer said: “Again I am very proud to be the year-end No. 1. My main goal for this year was winning a gold medal in London, but being No. 1 at the end of this year is something that I have worked for all-year long. So it is a crown for all the hard work I put in.”

ITF President Francesco Ricci Bitti said: “I would like to pay tribute to all the 2012 ITF World Champions, who have contributed to a successful year for the sport at all levels.” —- ITF