Home  »  OTHER SPORTS   »   Development of Aerobic Gymnastics in the IRI 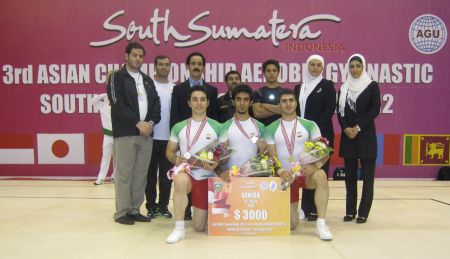 Lausanne, Nov 27: After having participated at an Aerobic Gymnastics World Championships for the very first time in 2008, the Gymnastics Federation of the Islamic Republic of Iran throve at this year’s international competitions.

The success story of the discipline’s rapid development in Iran over the past four year is not surprising if you have a look behind the scenes. When Ahmad Mohtashami assumed the presidency of the federation in 2007, he had decided to incorporate the launching of Aerobics into his master plan. Promotion and development of the discipline continued on with the new president, Jafar Darvishzadeh.

Over the last four years, 2001 World Games, 2003 European and 2004 World Champion in Individual Aerobic Gymnastics Grégory Alcan of France collaborated with the federation, supporting them as a national coach, advisor and educator. It is not least due to Alcan’s commitment that Aerobic Gymnastics enjoys wide national support today.

In the aim of becoming technical sport advisor at the French Ministry of Sports, Alcan has recently taken up studies at the National Institute of Sport, Expertise and Performance (INSEP) in Paris. The engagement does not allow Alcan to pursue his activities with the Iranian federation. He takes stock of his experience:

“Exporting the expertise of the French school of Aerobic Gymnastics based on my own academic and sporting career and by adapting to Iranian society and gymnastic culture, I was able to make strides in high-level Aerobic Gymnastics and Sport for All.

‘How can we reconcile French expertise in Aerobic Gymnastics with the specific characteristics of a middle-eastern society that has different norms and ideologies?’ In my opinion, the Iranian project is a reference model that can be applied to the entire region.

• Establish a development strategy for the discipline at the national level by creating synergy between a range of national institutional partners: the school sport federation and the university sport federation;

• Set up a reserve of gymnasts in the different categories and select the best from among them for a national Iranian team;

• Train men and women to be technical directors, which will ensure the longevity of the project that I put in place;

• Launch a discussion on the potential participation of female athletes in international Aerobic Gymnastics events.

To this end, I organised my work using a global horizontal and collaborative management approach. Through this strategy we were able to reach our objectives in both high-performance and sport for all activities. Thus we were able to obtain the strongest progression of the Gymnastics Federation of the Islamic Republic of Iran in history:

• 6th place in Trios at the 2011 World University Championships in Shenzen (China);

• Group finalist at the 2012 World Championships in Sofia (Bulgaria);

• Qualification for the 2013 World Games in Cali (Colombia);

• Silver medallist at the 2012 Asian Championships in Palembang (Indonesia).

All while safeguarding project sustainability at the amateur level:

• Identifying and preparing the future generation of champions;

This experience was very enriching for me personally. I discovered a culture where welcome, exchange, support, respect for self and for others hold an important place in daily life.

With an ambitious strategy in place and the gymnasts having reached a promising international level, the Gymnastics Federation of the Islamic Republic of Iran will continue to invest in Aerobic Gymnastics. With great aspirations and the collaboration of Hadi Gashempour, who had helped to build up the national team, as Alcan’s successor, the federation has set the following objectives for the future:

• Preparation of the new AG1 AG2 gymnasts and seniors for the 2014 WC;

• The establishing of an FIG Academy in the area;

• Restructuring of the federation’s Aerobic Commission with talented leaders who have been recently trained;

• Foster a discussion on the steps to take toward incorporating female gymnasts into Aerobic competitions (Step).

Atkinson congratulates Alcan on his work:

“The combination of great technical knowledge, performance success and high level coaching ability with national ‘political will’ and support is a proven partnership for success! Such is the case with former World Champion Gregory Alcan (FRA) and the Islamic Republic of Iran. Gregory’s success is inspirational and will give great motivation to many developing nations involved in Aerobic Gymnastics. Gregory’s ‘across the board’ approach means involving everyone and his excellent forward planning looks at all categories of the discipline and includes FIG Academy involvement. Congratulations Gregory and all success in your new endeavour!” —- FGI