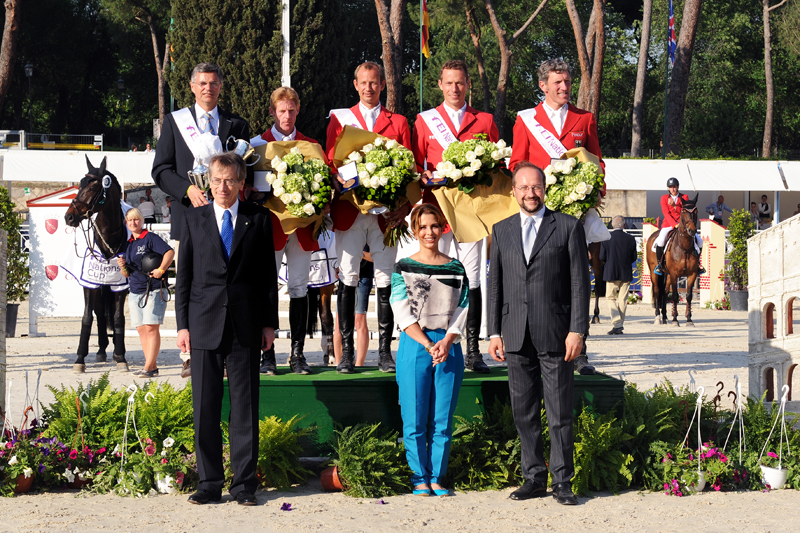 By: Louise Parkes: Convincing win, A powerful German team breezed to victory in the second leg of the FEI Nations Cup™ 2012 series at the Piazza di Siena in Rome (ITA) this afternoon. On a day when FEI President, Princess Haya, visited the venue where she competed herself during her jumping career, and where all the talk was about the forthcoming Olympic Games in London and the proposed changes to the FEI Nations Cup™ format, the competition provided the excitement that has ensured its survival for over a century.

Switzerland finished a close second today, just four faults behind the winning side, while the first-leg winners from Belgium slotted into third. The host nation of Italy, making a guest appearance since they no longer compete in the Top League, did themselves proud when galloping into fourth spot ahead of France, while The Netherlands and Great Britain shared sixth. For Sweden and Ireland however it was a difficult day when both were left vulnerable due to rider eliminations and had to settle for eighth and ninth places respectively.

Uliano Vezzani’s course proved a good test, but when the only mistake made by the German side first time out was a pole off the vertical at fence six for second-line rider Christian Ahlmann with Taloubet Z, then they already had the whip hand with a zero score at the halfway stage

The open water at fence four created relatively few problems, but threw some partnerships off balance for the following oxer which was jumped off a right-hand bend, while for others the distance to the following vertical didn’t come up just right. However the triple combination claimed a significant number of victims, as did the final line from the oxer at ten to the following double.

The Belgians looked like they might well repeat the success they enjoyed at La Baule (FRA) two weeks earlier following lovely opening clears from both Ludo (Challenge vd Begijnakker) and Olivier Philippaerts (Cabrio van de Heffnink). It was a big day for Ludo as both of his twin sons were competing alongside him for the first time at Top League level, but going to Rome was not the easiest decision he had ever made, as his father, who had been ill for some time, died on Wednesday.

Yesterday he explained however that he believed his Dad would have wanted his son and grandsons to compete. “My first super-league with my two sons gives me a mixed feeling” Ludo admitted. “My father would have been very proud to see us together in the team. We are going to try to honour him with a good performance” he added. And they succeeded admirably when going into the second round in runner-up spot carrying just four faults, and slipping just one place to finish third in the final analysis.

With The Netherlands, Switzerland, Sweden, Great Britain and France all lying joint-third with eight faults going into round two, and Italy next best with 12, the competition was still wide open for all except the Irish whose chances were scuppered by elimination for Niall Talbot, and an uncharacteristic 20 faults from Cian O’Connor. Talbot’s Nicos de la Cense stopped twice at the triple combination, giving his rider a heavy fall at their second attempt, while O’Connor’s Blue Loyd missed his strike at the open water and dropped four fences after that. So despite foot-perfect runs for pathfinder Shane Sweetnam (Amaretto Darco) and anchorman Billy Twomey (Tinka’s Serenade) the Irish day was already done.

The Italians however really rose to the occasion in front of their home crowd and showed they won’t be long returning to the top level of Nations Cup jumping, Francesca Capponi producing a spectacular double-clear from her massive gelding, Stallone which, following a second-round clear from Juan Carlos Garcia and Bonzai van de Warande, meant the hosts only had to add a further four faults to their tally to complete with 16 on the board. And that would rocket them up the order.

The battle between the Dutch, Swiss, Swedes, British and French was a different matter altogether – the Dutch situation deteriorating when forced to add 16 to their scoreline, the British and French adding 12 despite a double-clear performance from Scott Brash and Hello Sanctos (GBR) and a second-round clear from Kevin Staut and Silvana HDC (FRA).

The Swedes lost their way when Angelica Augustsson’s fiery mare, Mic Mac du Tillard, suddenly slammed on the brakes when asked to turn away from the in-gate on the approach to fence three. The rider patiently tried to change her horse’s mind, but Mic Mac could not be persuaded to go any direction other than backwards, and it took the intervention of her groom to get her leave the ring. This meant that Helena Persson’s (Bonzai H) second-round 12, and the single errors from both Lisen Fredricson (Matrix) and Henrik von Eckermann (Allerdings) had to be counted, and with a final scoreline of 28 they plummeted down the rankings.

In stark contrast however, the Swiss were superb as they racked up three clears including the second part of a brilliant double from pathfinder Paul Estermann riding the relatively unknown 10 year old mare Castlefield Eclipse. Chef d’Equipe, Urs Gronig, has plenty of food for thought ahead of the Olympic Games now as Simone Wettstein (Clipmyhorse Cash and Go) and Clarissa Crotta (West Side v Meerputhoeve) coped really well with the second-round pressure to jump big and clean all the way, while Janika Sprunger (Uptown Boy) picked up eight faults for the drop score this time out. Their final total of eight was always going to leave them in a prominent position.

And they overtook the Belgians who completed on 12 faults despite an anchorman clear from Jos Lansink and Cavalor Valentina. But the Germans were already in the winner’s enclosure, Marco Kutscher and Cornet Obolensky hitting the oxer at 10 at their second attempt, but the result already decided when Ahlmann’s second-round clear was followed by another from Marcus Ehning and Copin van de Broy. Beerbaum didn’t need to return to the arena.

“It was a good Nations Cup course, not too difficult but very fair, although after the first round I thought we might have a jump-off” Beerbaum said afterwards. “And it was good that some new combinations like Francesca Capponi (ITA) had the chance to have two clear rounds” he added.

German Chef d’Equipe, Otto Becker, was delighted with his side’s performance. Coming to Rome was part of the strategy for his country in the lead-in to the Olympic summer. He said “all my riders have to compete in the Nations Cup – that is our plan – and we are happy to have such strong riders – we do look strong on paper” he admitted, thinking ahead to London.

“We have a lot of history here in Rome” he pointed out as Germany has now recorded 10 wins in the Italian capital city. “I competed in my first Nations Cup here and I was on the winning team in 1993, so Rome has been good for me!” he added. Looking ahead, he said he is sending a completely different team to St Gallen, Switzerland for the third leg of FEI Nations Cup™ 2012 next week and the following leg in Rotterdam, The Netherlands later in June.

Beerbaum pointed out “we are also here to show that the Nations Cups are a number one priority for us, and the fact that Her Royal Highness is here shows that the FEI is also committed to this “product”, and perhaps also to this show!”.

Asked about the potential changes to the FEI Nations Cup™ series, the FEI President explained that new ideas had been “put on the table” at the recent FEI Sports Forum, but that, to date, “nothing is set in stone”. Princess Haya said the intention is “to inspire discussion” and that a working group is in constant contact with riders and other stakeholders as the discussions take place. “Until the formula is perfect, there will be no change” Princess Haya added however.

For now, there are still six more vitally important legs to take place before the 2012 series champions are crowned. And the defending series champions from Germany are lying just one point behind Belgium who remain at the top of the leaderboard going to St Gallen in seven days time.

Today’s winners from Germany are the defending champions having won the FEI Nations Cup™ series in 2011.

9 teams competed in today’s second leg of the FEI Nations Cup™ 2012 series – the host country of Italy which is no longer competing in the Top League was making a guest appearance on home ground and finished a creditable fourth.

2 eliminations – Ireland’s Niall Talbot who took a fall from Nicos de la Cense at the triple combination in the first round and Sweden’s Angelica Augustsson whose mare, Mic Mac du Tillard, refused to continue after jumping the first two fences in round two.

FEI President, Her Royal Highness Princess Haya – “I competed here several times but never so well as these riders (the German team) – it’s an inspiration to see them riding and it was a beautiful day here today”. Photo: FEI/Bruno de Lorenzo