Gough becomes the first Englishman to lift the trophy since Matthew Fitzpatrick’s victory at Notts (Hollinwell) in 2012. 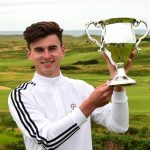 He (Conor Gough) will now play in The 124th Amateur Championship at Portmarnock and The Island, and gains an exemption into Final Qualifying for The 148th Open, also at Royal Portrush, as a result of his victory.

The 15-year-old teed off for the second round of the final 2up over Ballester after a closely contested opening 18 holes of high quality golf.

Neither player manged to advance further than a one hole lead until the par three 16th where Ballester, at 1-down, faltered with a bogey.

Conor Gough went further ahead thanks to a birdie at the 17th but the Spaniard hit back on the next to reduce his opponent’s lead to two holes heading into the break.

Gough stumbled in the early stages of the afternoon round with a double bogey at the 20th and a bogey on the 21st which enabled Ballester to square the match once more.

The lead continued to swing to-and-fro on the front nine with neither player able to build a commanding lead.

With the crowds building, the key moment came at the par four 29th.

Having watched Ballester roll in a 20ft putt for birdie, Gough stood over his own which rested around 15ft from the pin.

Under pressure, he read the line brilliantly and used the break off the left to find the hole.

On the next, both players found the bottom of a steep embankment with their approach shots to the green.

Ballester showed his touch to pitch close to the pin from the heavy rough but Gough went one better as he delighted the crowd by chipping in for eagle and a one hole lead.

Gough, who already has two wins under his belt this season having claimed the McGregor Trophy in July and the boys’ title at the Fairhaven Trophy earlier in the year, never looked back from that point and grew in confidence as the match neared its conclusion.

He carded another birdie at the par four 32nd to double his lead and required just a half for victory at the 35th.

When Ballester’s tee shot landed in a gorse bush to the left of the fairway he deemed the ball unplayable and took a drop under penalty of one stroke.

Sadly, the young Spaniard’s approach fell just short and found a greenside bunker at which point he conceded the hole and the match to the Englishman who completed a memorable 3&1 victory.

Since 1952, the Peter Garner Bowl has been presented to the best performing 16-year-old. —- Photo the R&A/Getty Images.