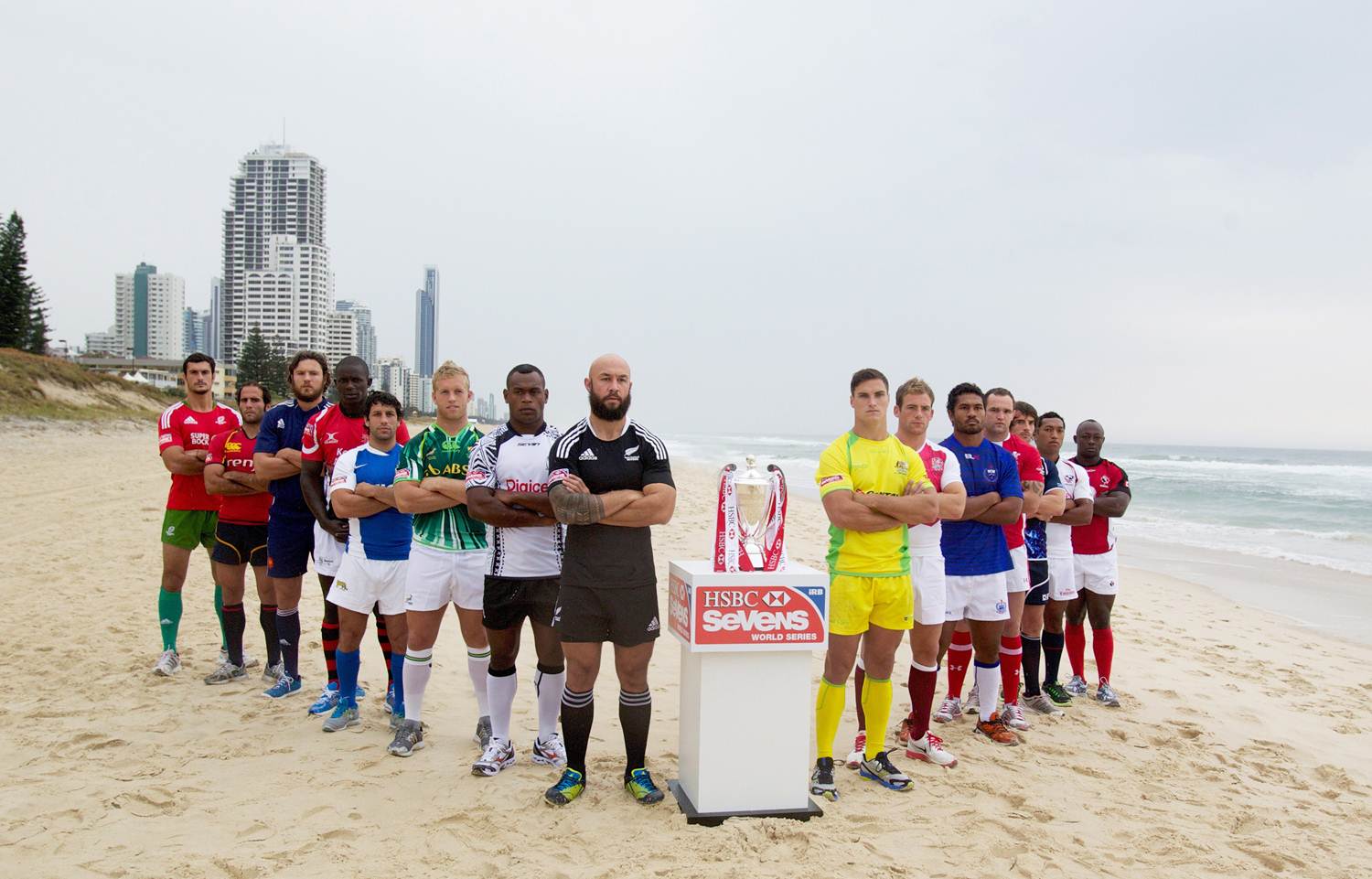 Dublin – Ireland, Oct 11, 2012: The captains of the 15 Series core teams from around the world joined together today at a stunning seaside location at Surfers Paradise on Australia’s Gold Coast to launch the HSBC Sevens World Series 2012/13.

The Gold Coast Sevens Fever Pitch, organised by the Australian Rugby Union, is set to provide the players with their opening challenge of the new season on 13-14 October, the first of nine rounds on the global grand prix circuit.

Australia Sevens captain Ed Jenkins joined with his multi-national counterparts, with all eyes trained on the World Series trophy.

“It’s great being back here to start the season on home soil. There are some pretty hostile crowds for us Aussies around the World Series, so to be here on home soil means a lot to us,” said Jenkins.

“It’s been a long time since we (Australia) last won on home soil (2002) but we’re confident in our ability and we’ll just see what happens. We had an Oceania tournament to qualify for the World Cup recently and came out on top there, and had a few local tournaments too, so preparation has been good,” added Jenkins, whose side faces defending Gold Coast champions Fiji in the final match on day one at Skilled Park.

“Fiji have named a number of debutants but they will have played a lot of Sevens back home so it’s always going to tough, but I believe in us and we’ll definitely be trying to put on a show for the fans out there.”

IRB Sevens Tournament Director, Beth Coalter was on hand with the captains to celebrate the launch of the new Series.

“It’s hugely exciting to be kicking off a new HSBC Sevens World Series here on the Gold Coast. We have 15 core teams going to all nine rounds this year so we’re expecting the quality of rugby and the closeness of the matches to be better than ever before,” said Coalter.

“Not only do the teams have the Series to look forward to this season, there is also the Rugby World Cup Sevens to build towards in Moscow after the climax of the Series, so the next eight months will be an intriguing form guide for that too.

“There is also a genuine sense of excitement and anticipation now that we are all setting out on our first Olympic cycle towards Rio 2016. The women’s Series will be starting soon too, but for now the focus is very much on the men’s teams and I am sure they will deliver here on the Gold Coast for the fans attending and also the millions watching around the world.”

The 2011/12 Series broke all previous records in terms of attendance and global broadcast figures, and title sponsor HSBC is looking forward to another successful year.

“The start of the 2012/13 HSBC Sevens World Series kicks off the inclusion of Sevens in the Olympic programme. Last season the Series continued its perpetual growth as 547,000 people attended the nine international tournaments and the action on and off the pitch was broadcast to over 340 million homes worldwide,” said Giles Morgan, Global Head of Sponsorship & Events, HSBC Holdings plc.

“HSBC is looking forward to another successful season as we continue our investment in Sevens around the world with activities that will reward customers and help further connect fans from different nations. We wish every competing nation the best of luck for another entertaining and hopefully record breaking year.”