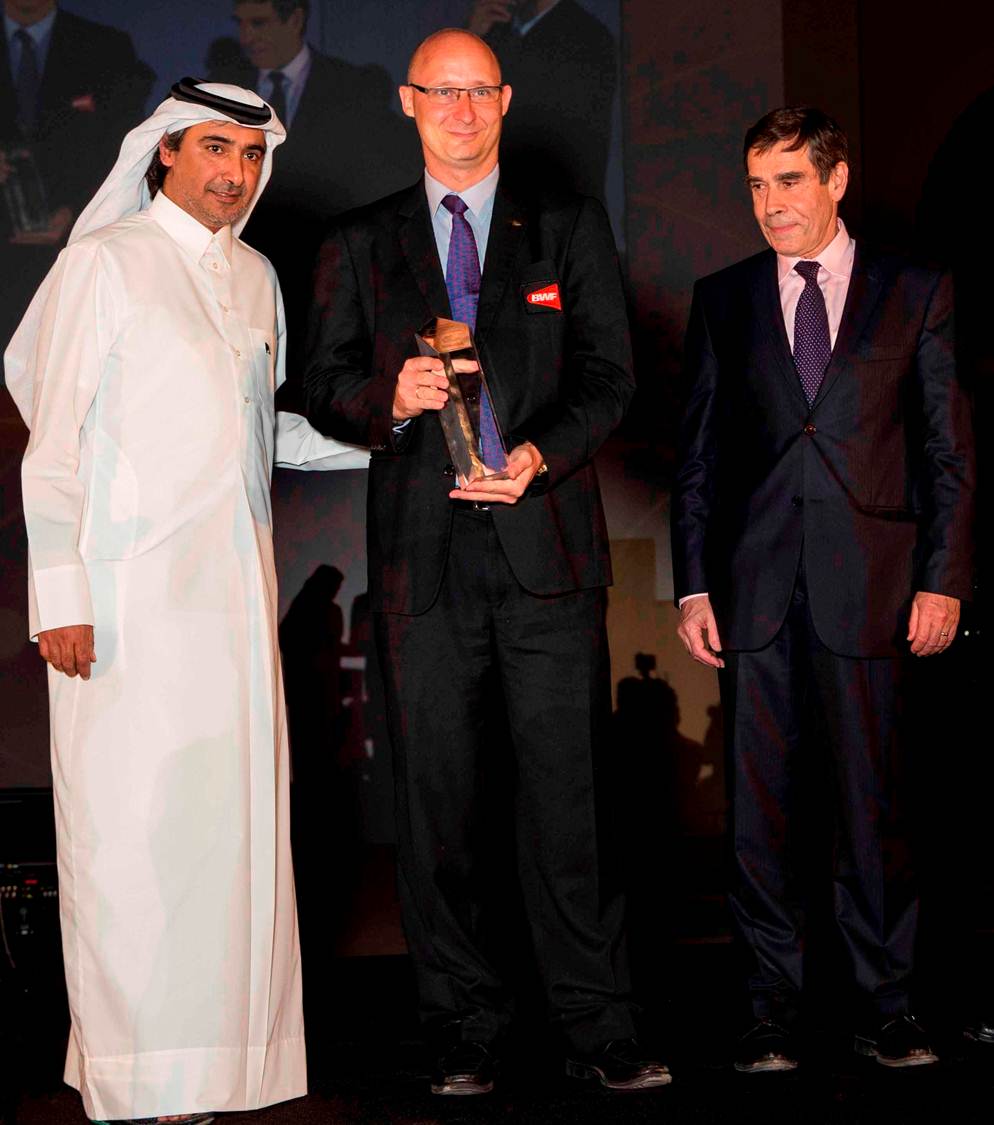 Doha – Qatar, Mar 20, 2013: The Badminton World Federation’s “courageous decision” to protect its sport’s integrity at last summer’s London Olympics has been recognised by the International Centre for Sport Security and Paris 1 Panthéon-Sorbonne University.

At a ceremony in Doha, Qatar, last Monday evening, BWF Secretary General Thomas Lund accepted the inaugural ICSS-Paris 1 Panthéon-Sorbonne University Trophy for ‘Outstanding Achievement in Promoting Sport Integrity’ for BWF’s swift and resolute action in disqualifying four Women’s Doubles pairs from the Olympics for “not using one’s best efforts to win a match” and “conducting oneself in a manner that is clearly abusive or detrimental to the sport”.

Speaking at a gala dinner on the opening night of the Securing Sport 2013 conference, Mohammed Hanzab, ICSS President said: “It gives me enormous pleasure to present the inaugural ICSS-Paris 1 Panthéon-Sorbonne University Trophy to the Badminton World Federation for showing us all at the Olympic Games last year that courageous decisions with immediate consequences are not only necessary but highly effective in dealing with integrity challenges.”

Reacting to the announcement, BWF President Dr Kang Young Joong noted “The London 2012 case has definitely been a learning curve for the BWF and we are committed to doing what it takes to ensure this never happens again. Being recognised by the ICSS and the Paris 1 Panthéon-Sorbonne University today gives us further assurance that our sport upholds the right values.”

In receiving the award, Lund said the BWF was “honoured” to accept the prize for promoting integrity in sport, albeit through regrettable circumstances.

“No sport wishes to have its integrity and commitment to proper ethical behaviour tested. However, when such incidents arise, it’s essential to stand firm and take appropriate action. The BWF would have liked to avoid the Olympic disqualifications altogether but we are confident that, as the world-governing organisation for badminton, we took the right decision,” added the Secretary General.

Criteria for the prize were:

The awarding of this trophy signals the launch of collaboration between ICSS and the Paris 1 Panthéon-Sorbonne University with the goal of establishing an official prize for integrity next year. The ICSS is an international, non-profit institution that aims to help event organisers to stage safer major sporting events. Its mission is to improve security, safety and integrity in sport by addressing real issues and providing world-leading services, skills, networks and knowledge. —- BWF