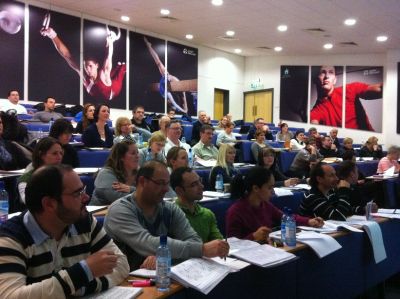 A total of 42 participants from 19 different federations and representing the Continental Unions of Europe, Africa, Pan America and Asia participated in this course. It is the only opportunity for judges to certify in the highest brevet category of four, Category 1. Candidates were extremely well prepared and are clearly ready for competitions around the world throughout the 2013 – 2016 Olympic Cycle.

The judges at the course were introduced to new rules for the upcoming cycle. The course focused on the two major changes for the 2013 cycle: The new Tables of Difficulty and a new system of judging artistry. The new Tables are a simplified format, but it takes time to adapt to the new version. The assistance of federations to review and correct the huge document was much appreciated.

Artistry Judging is the only major change to the Code of Points for the 2013 cycle. The new rules make it possible to apply logical penalties. At the same time, it makes it much easier to reward special exercises that go beyond the rules by evoking emotional reaction.

This Intercontinental Course also served as the final event lead by the 2009-2012 FIG Acrobatic Gymnastics Technical Committee, marking the concluding function of XXII cycle TC members before the Change of Powers Ceremony in February. All course participants bid farewell to TC members Raul Manuel Fonseca Correia (POR) and Wieslawa Milewska (POL) and welcomed Rosy Taeymans (BEL), who took over the TC presidency for the new cycle. Newly elected TC members Nikolina Hirstova, (BUL), Frank Böhm (GER) and Yuriy Golyak (UKR) were present for the course and took exams alongside the rest of the candidates.

Special thanks go out to British Gymnastics who provided good conditions and assured smooth running and excellent organization of the course in Lilleshall; a full success. The organizational support from Steve Green was much appreciated. Thanks also to Lindsey Gulliver and Kathyrn Bonner for their technical support.

Following this Intercontinental Judges Course, a gamut of international judges’ courses organized by FIG member federations will be held over the coming months, with the first one to be held in Visaginas (LTU) on February 3 – 6, 2013. International judges’ courses are designed to give national Gymnastics federations the opportunity to train their judges on site in order for them to renew, confirm or improve their brevet category. —- FIG