Home  »  OTHER SPORTS   »   Tactical supremacy wins it for Kazakhstan 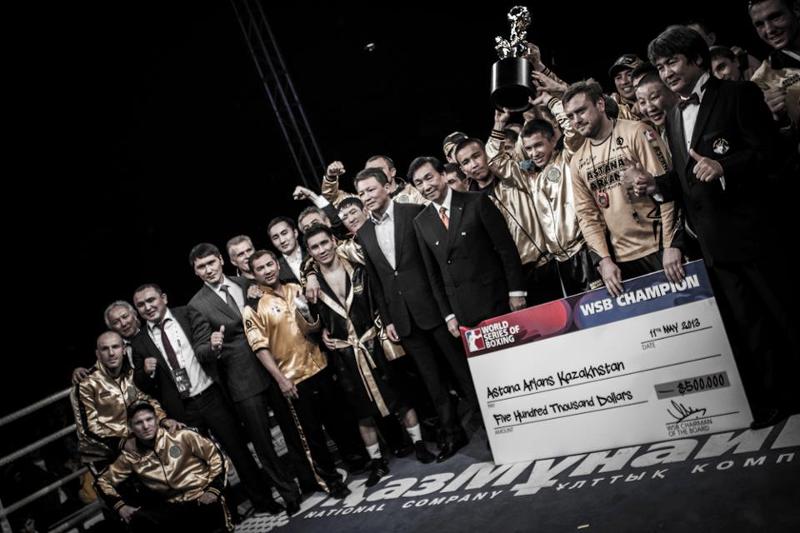 Although the Arlans went into the second day 3-2 up over the Ukraine Otamans, the latter managed to pull themselves back into the match. At one point the Ukraine team went ahead 5-4 as both teams’ fortunes swung back and forth. Indeed the visitors were only one round away from clinching the title when Heavyweight (91+kg) Rostyslav Arkhypenko came close to causing the upset of the season in his bout against Ruslan Myrsatayev.

In the end however it was the superior team line-up of the Arlans that won the event for the home side. The trump card was Bagdad Alimbekov. The WSB number three ranked Bantamweight (50-54kg) had been held back from the main bouts, specifically to deal with the risk of a sudden death scenario. The Otamans had already sent their best Bantamweights out to compete, meaning that 23 year old Alexandr Riscan, who held a WSB record of 3-7 and a rank of 29 going into this bout, was forced to face the far more experienced Kazakh boxer. Although the young Moldovan battled gamely the difference in class was clear for all to see. The 29 year old Alimbekov looked comfortable as he took every round on his way to winning the tournament for the Arlans team.

The day started brightly for Kazakhstan. At Bantamweight (50-54kg) Miras Zhakupov took on the Ukraine’s Mykola Butsenko. The Kazakh boxer looked very composed against his Otamans opponent and made good use of his reach. Nonetheless the bout was close throughout with the Arlans athlete getting a cut above his right eyebrow in round four. This spurred Butsenko into greater action but Zhakupov managed to hold on for the win.

Meanwhile at Lightweight (57-61kg), Irishman Eric Donovan failed to make the most of a good early start against Vyacheslav Kyslytsyn of the Otamans. Despite a scrappy bout the Ukrainian managed to close the score line on split decision to 4-3, leaving the Otamans some hope of recovery.

The pressure was already beginning to mount for both sides by the time Middleweights (68-73kg) Konstantin Snigur (ISR, Astana Arlans Kazakhstan) and Dmytro Mytrofanov (UKR, Ukraine Otamans), took to the ring. Both fighters came to the bout brimming with confidence on the back of a three and five bout winning streak respectively. The WSB number 3 ranked Middleweight Mytrofanov however got the better of proceedings. Snigur found it hard to keep the Otamans star at bay as he pushed forward relentlessly to work on the inside. In the last two rounds Snigur changed tactics and, rather than trying to keep his opponent out, began to hold him in and work his own inside game. This was more successful, but it was too little too late as Mytrofanov brought the scores back to 4-4.

Thus it was for Light Heavyweights (80-85kg), Ehsan Rouzbahani from Iran (Arlans) and Oleksandr Gvozdyk of the Ukraine Otamans to tip the balance one way or another. Rouzbahani came out in an orthodox stance showing good tactical use of his ability to switch. The Iranian boxer was initially all over his Ukrainian opponent, destroying his rhythm and not allowing him time to settle. However Gvozdyk quickly adjusted his strategy for round two and took to the centre of the ring. At the opening of round three Gvozdyk dropped Rouzbahani with a hard left hook. Though the boxer recovered, the corner almost immediately threw the towel in, giving Ukraine a 5-4 advantage via TKO.

In a make or break Heavyweight (91+kg) bout the experienced Kazakh boxer Ruslan Myrsatayev struggled to contain his Otamans opponent, Rostyslav Arkhypenko. With the Ukraine out in front coming into the final match, it was critical for Arkhypenko to win the bout to keep the hosts in the event. He took the first couple of rounds but seemed to slow coming into the third. A second clash of heads in the fourth cost the Kazakh a point and brought the bout to two rounds each. If the young Arkhypenko were to win the fifth round at that stage the finals would have been Ukraine’s. However, after a phenomenally close final round, Myrsatayev won the bout to secure the sudden death match.

The rest, as they say, is history. Although the young Ukrainian Bantamweight Alexandr Riscan never looked close to beating the more experienced Bagdad Alimbekov, he deserves praise nonetheless for the gamely manner in which he approached the task.