Home  »  OTHER SPORTS   »   Lomachenko comes in for Team Finals 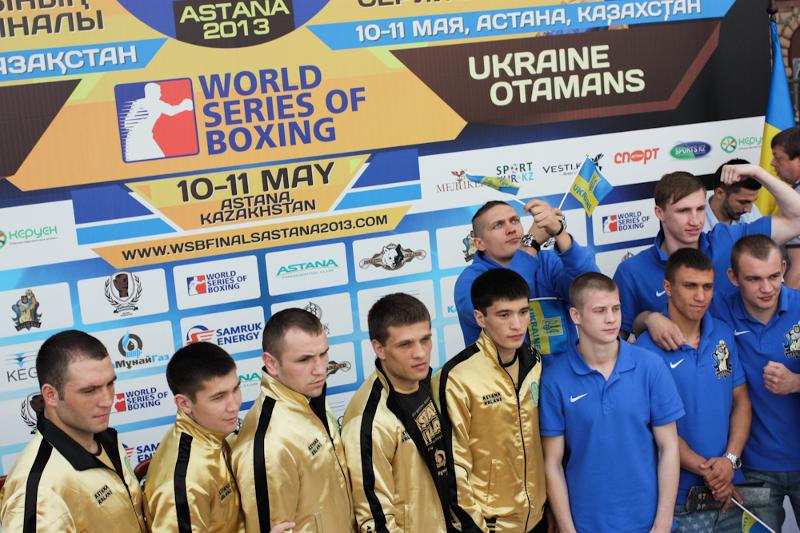 Astana – Kazakhstan, May 09, 2013: Lomachenko, Who has the best boxing team in the world? Well, we are about to find out in the 2013 World Series of Boxing (WSB) Team Finals.

After 72 matches and 360 bouts, the WSB Team Finals will be contested across two days starting on Friday 10th May at 20:00 local time (14:00 GMT). The remaining ten bouts – potentially eleven in case of a draw after the first night – will be the most exciting the boxing world has seen since the London 2012 Olympic Games Finals. Our finalists will be the star studded Ukraine Otamans and local favourites Astana Arlans Kazakhstan.

The teams have had very different seasons so far with the Arlans showing continual dominance and consistently good performances on their third bid to take the title. The Otamans meanwhile had a sluggish start to the season, holding back their main talent until the last possible minute but in so doing giving valuable experience to the squad’s fringe players. That may be a factor in this week’s ten man event.

The event will be broadcast live on Youtube and by a number of national and international broadcasters (Details available on our website).

Ukraine’s Viktor Gogolyev comes into the final with a 1-1 WSB record while Arlans’ Southpaw Meirbolat is also just 1-1 in WSB meaning that the contest is well balanced on paper and could go either way.

With the Ukraine Otamans’ star boxer and WSB number one Lightweight Lomachenko recovered from an injury, he is back in the starting line-up. This means the dream fight that most WSB fans are craving to see has been given the green light. Lomachenko, the two-time World and Olympic Champion has become a sporting icon in his homeland and is the man to beat in this season of WSB. The Arlans captain Bashenov is one of few boxers on the circuit believed capable of defeating Lomachenko. The number 2 ranked WSB Lightweight will however have to keep his wits about him if he is to upset the odds.

The Otaman’s Barabanov looks set to have the most difficult tie of the night as the WSB rookie takes on fellow countryman and Arlans icon Derevyanchenko. Barabanov, the 2012 National Champion only holds a WSB record of 0-1. If he wins it will unquestionably be the upset of the season.

Arlans’ Derevyanchenko is one of the most impressive fighters in WSB. Singled out for praise by Kazakhstan’s 2004 Olympic Gold Medallist Artayev, Derevyanchenko is among the most consistent fighters across WSB’s three seasons to date. With a record of 17-1 he is the clear favourite in this bout. Don’t be fooled into thinking he will take it easy on his countrymen either. With the selection for Rio 2016 wide open he will want to beat down any domestic rival put in front of him.

The Ukraine’s Sergiy Lapin enters these finals with the dubious distinction of being the boxer with the weakest record on the Otamans’ selection for the first night of the finals. 0-5 in the WSB across two seasons and in the hostile environment of Astana, he will have his work cut out for him. Arlans’ Croatian boxer meanwhile, the 2011 European Bronze Medallist has a 12-5 WSB record and will be expected by his coach and Kazakhstan’s fans to win comfortably.

One of the most exciting boxers of the finals, 2012 Olympic Champion Usyk of the Otamans will be looking to show the skills that have made him the number one ranked WSB Heavyweight boxer. Undefeated in this his debut season, his 5-0 record will give Ukrainian fans hope. But with the Arlans’ first pick Filip Hrgovic out; it falls on Mihai Nistor to step up to the scratch in this bout. With two WSB wins – including the first ever WSB defeat for Italian icon Clemente Russo – under his belt and a 2-1 WSB record, the European Bronze Medallist (2011) isn’t exactly a forlorn hope, though he does face an uphill battle if he is hoping to upset the odds in this bout. —- WSB