Home  »  OTHER SPORTS   »   Argentina to take big boys to Algeria 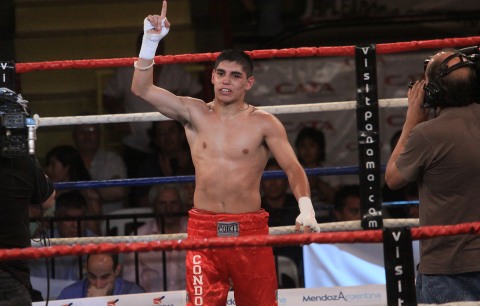 Lausanne, Switzerland, Jan 07, 2013: Algeria, This all important match sees the two bottom teams in Group A go head-to-head this Friday 11 January (18:55 local time) at the Salle Hocine-Chaalane. Algeria Desert Hawks will be looking to make home advantage count but they will be facing a full-strength Condors team travelling with the impressive Argentine duo Fernando Martinez and Yamil Peralta.

The Bantamweight (50-54kg) clash between the Hawks’ Samir Brahimi and classy operator Martinez will be up first, with the odds staked in favour of the away boxer here. The slick 21-year-old Argentinean orthodox fighter has speed and agility in abundance and has five wins from his previous seven World Series of Boxing (WSB) outings. Brahimi on the other hand has never tasted victory in this competition.

Two-time Olympian Abdelkader Chadi will be brimming with confidence following his win versus Azerbaijan’s Isa Isayev in week two so will be relishing the prospect of pitting his wits against Argentina’s German Benitez in the Lightweight (57-61kg) contest. The 26-year-old Algerian is vastly experienced and with the backing of his home crowd, should come up with the good for his team.

Chadi told WSB, “We need the victory this Friday. I will be giving my all to make sure I win my fight. I am ready for it. All I ask is for the Hawks to be blessed for this first match of the year”.

It will be tight between Algeria’s 20-year-old Ilyas Abbadi and crisp counter-puncher Juan Velasco at Middleweight (68-73kg). This might be the most important bout of the evening and will have a major influence on the final result, which could decide the fate of these teams’ season. After a polished display in week three, savvy Velasco comes into the fight as the slight favourite.

The rising star of Argentine boxing and the poster-boy of the Condors team, the tall and rangy 21-year-old Peralta will then be gracing the canvas to face Algerian Light Heavyweight (80-85kg) Nabil Kassel in the penultimate contest of the night. Peralta alerted the world to his undoubted talent at the London Olympic Games and in his debut WSB season has been dominant in his two outings. Kassel is powerful but will struggle to contain the imposing Argentine.

Algerian superstar Chouaib Bouloudinats will be hoping that at the end of the night he will be in a position to give his team the victory when he takes to the ring at Heavyweight (91+kg) to go toe-to-toe with Angel Villalba. The 25-year-old hard-hitting Bouloudinats is one the fiercest competitors around and after a hugely impressive performance last time around, the experienced orthodox fighter will want to get those all-important first points on the board for his team. Villalba, who will be making his WSB bow when the two battle it out on Friday, will be in for a tough night.

This is make-or-break time for both these teams so nerves could play a deciding factor. Although very evenly matched, it looks as if the Condors have the advantage on paper with two stellar names lining up. —- WSB