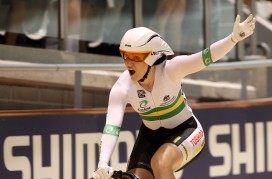 The German women produced a stunning upset, setting a world record in qualifying and then again in the final to beat Australia in the women’s team sprint. But in the surprise of the evening, Australia captured the men’s team sprint title in front a near capacity home crowd when the disqualification of favourites Germany and Great Britain elevated them to the gold medal ride off against France.

A full summary of each event follows:

Matthew Glaetzer’s final lap in the men’s team sprint has won Australia’s first gold medal at the 2012 UCI Track Cycling World Championships. Glaetzer’s 12.903 seconds for the final lap of three hauled in Michael D’Almeida to pip the French trio by 0.001 seconds in covering the 750 metres in 43.266 seconds.

The win by Scott Sunderland, Shane Perkins and Glaetzer was the first by Australia to the world men’s team sprint title since 1996. An ecstatic Perkins, who was knocked off his bike on Sunday when hit by a car, recovered to produce one of the rides of his career.

“We came here wanting to do a personal best time for the team and we did that in the qualifying, and then to obviously to hear we were in the gold and silver ride off, our energy and excitement went up another level. It showed in that final we were pretty pumped. We knew we had the ability, we knew we had to bring our times down a little bit and we did that. Thanks for the guys for a fantastic ride, they did absolutely awesome,” Perkins said.

“I think I did about a 17.4 and if I did it was definitely a PB. I’ve definitely got to be happy with that especially a home crowd a lot of pressure world championships, I’m absolutely stoked, especially with the week that I’ve had with the car and that sort of thing so I couldn’t ask for anything better.”

Australia’s team 16 years ago in Manchester was Darryn Hill, Shane Kelly and Gary Neiwand. Australia originally qualified for the bronze medal ride off but Germany and Great Britain were relegated from the finals after drawing away by more than 15 metres before the end of the lap that the rider is to lead. Gregory Bauge gave the French team a 0.169 second lead following the first lap with Kevin Sireau maintaining the lead over Perkins after the second lap.

But the hosts took their luck with Glaetzer roared home by the near 4000 capacity crowd. New Zealand won the bronze medal ride-off against Japan, its second third placing of the evening. The relegation for Great Britain’s Sir Chris Hoy meant he did not win a medal in this event for the first time at a world championship in his career. Hoy missed the 2009 world titles due to injury but his medal tally from the men’s sprint dates back to the 1999 world titles in 1999.

The much anticipated blue ribboned event, the men’s team pursuit, lived up to its expectation with a true ‘Ashes’ battle producing a new world best. The British team of Geraint Thomas, Ed Clancy, Peter Kennaugh and Steven Burke rode the 4000 metres in 3.53.295 seconds in the final to defeat Australia and break the record posted by their compatriots at the 2008 Beijing Olympic Games. Australia’s Jack Bobridge, Glenn O’Shea, Rohan Dennis and Michael Hepburn rode the third fastest time in history, 3 minutes 53.401 seconds, for the silver medal. Clancy rode first wheel to establish a lead for the British team, until the Australians led by 0.069 of a second at 2000 metres. The lead subsequently changed on each lap before Britain established a 0.324 of a second with 1000 metres left. Bobridge drove the hosts in the last two laps but the roar of a 4000 strong home crowd wasn’t enough to help the dual defending champions bridge the gap.

Thomas was buoyed by the victory, getting one back after the Australian’s dealt them the first blow in front of their home crowd at the London World Cup six weeks ago.

“It definitely makes up for London, that’s for sure,” Thomas said.

“It was a great race, it reminds me of Manchester back in ’08, before the games. We broke the world record there as well. I think we made a lot of gains after that and I’m sure we can do the same now.” A visibly disappointed Bobridge stressed the importance of a quick bounce back for the young Australian team. “It’s very disappointing. We went over there and got one up on them on their home turf. They’ve come over here and kicked us back in the guts and beat us here,” Bobridge said. “We didn’t get beaten by a bad time at all. We rode out personal best and they broke a world record. We got beaten by a better team on the day and that’s just the way it is.

“It was world title and we lost. We definitely just have to rebound from here. Use it as positive energy. Go away and every day now we wake up looking to the games and put 100% into the pedals every day until we get back to their home turf and hopefully get one back on them.”

Germany have ended the three-year reign of Australia’s Anna Meares and Kaarle McCulloch in the women’s team sprint setting a world record in the qualifying and again in the final. The German team of Miriam Welte and Kristina Vogel set a new world record of 32.549 seconds over the 500 metres to pip the three-time defending champions by 0.048 seconds in Hisense Arena. Meares gave Australia a perfect start with a 18.415 seconds first lap to hand a 0.231 second lead for McCulloch. But Vogel wore down McCulloch to clock 13.903 seconds for the final lap to win Germany its first gold medal in the event. China’s Gong Jinjie and Guo Shuang repeated their bronze medal won in Apeldoorn from year before beating Great Britain’s Victoria Pendleton and Jessica Varnish. Whilst the win for Vogel was no surprise, the world record was most unexpected.

“We thought the world championship would be possible to win. But from the past we thought we might have a chance at bronze,” Vogel said.

“But that we set the world record twice is awesome. I never would have allowed myself to dream let alone think about it. And now we’ve done it and we just have to think about the future.”

The Australians had to settle for second, behind a better team on the day.

“That’s just bike racing for you. We lost probably by a tyre tonight, but that’s racing. I’m so happy to come here and ride under the current world record, but to come second to the Germans in a world record, we can’t ask for anything more,” McCulloch said.

Ben Swift held off a fast finish from South Africa’s Nolan Hoffman in the men’s scratch to win Great Britain’s second rainbow jersey on the opening evening of competition. The 24-year-old took the lead in the back straight of the final lap in the 15 kilometre race to hold off Hoffman and Wim Stroetinga from the Netherlands. Austrian Andreas Muller broke with six laps left of the 60 to open a third of a lap lead. Czech rider Martin Blaha, Italian Elia Viviani and Swift chased down Mueller to catch him with less than two laps left before the British rider kicked to open a lead in the final back straight.

Hoffman, 26, around ten lengths behind Swift at the bell lap, turned the burners on the second last corner passing five riders but Swift held on by a wheel. Swift’s win was the first British gold medal for the event since it was introduced at the 2002 world championships, while it was South Africa’s first medal in the men’s scratch event. “I knew somebody was going to attack in the finish, and just tried to play it cool and make other people chase. It’s definitely the hardest I’ve ever had to work for a track cycling race,” Swift said. Hoffman was surprised by his efforts at his first elite world championships on the track.

“I’ve been to all the world cups and I’ve struggled a bit and I always thought the world champs is going to be hard,” Hoffman said. Image © John Veage