By Ijaz Chaudhry (PHF), Mar 16, 2017: (Beacnohouse School System) It is Pakistan Hockey Federation’s endeavor to revive hockey at all the levels especially the grassroots.

The national inter club hockey was revived after 10 years. Clubs in no less than 144 out of a total of 149 districts of the country participated. A massive exercise – beginning from the district round, the national inter-club hockey progressed to divisional/regional and then the provincial rounds. The final national round will be held in a few weeks’ time. 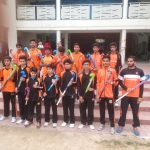 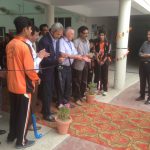 In the past, school hockey played a major role in providing young talent to Pakistan.

PHF has already announced the plans to hold the Schoolboys Under 16 National Championships. For which trials have almost been completed across the length and breadth of the country. Beaconhouse School System is easily the largest private school network in Pakistan.

The BHSS in collaboration with the PHF has launched an ambitious ‘hockey plan’.

Aim is to introduce hockey as a regular discipline in the Beaconhouse schools, with the PHF providing the coaches.

Initially a pilot project, it would start from Sheikhupura and extend to Sargodha, Faisalabad and Hafizabad in the first phase.

Early signs are encouraging as not only boys but a couple of girls have also joined the coaching programme.

Speaking on the occasion, Darlington was hopeful that hockey would soon become a popular game among the students of the BHSS.

Naveed Alam said,”I feel proud that the Beaconhouse School System has chosen my home town to start the programme. Sheikhupura has given a number of players to the national team including Olympic gold medallists and World Cup winners.”